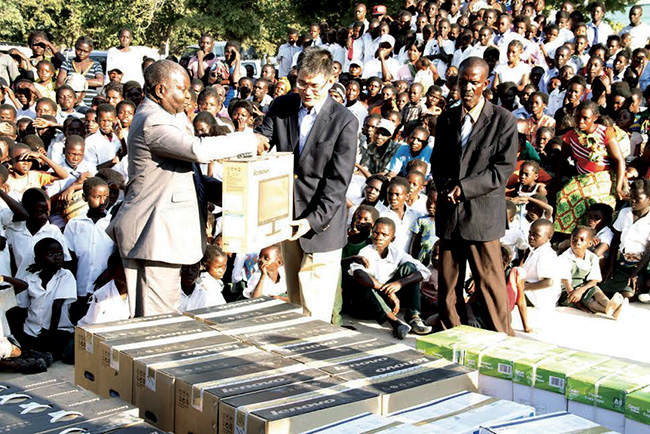 MACKSON WASAMUNU, Mansa
THE Chinese Embassy has donated 10 computers and 10 printers worth over US$10,000 to Chofoshi School in Bahati Constituency in Mansa.
And Minister of Foreign Affairs Harry Kalaba said investments in the education sector such as the donation by the Chinese embassy are critical to opening doors to a lot of opportunities.
Chinese ambassador to Zambia Yang Youming, who handed over the computers, said education is the only weapon one can use to change the world.
â€œWe Chinese say when the young are educated, then the country is educated. When the young are strong, the country is strong. Letâ€™s look at the world around us, we find those countries which are strong, they are strong in education, those countries which are advanced are advanced in education and there is no exception. Therefore, to us developing countries, if we wish that one day we catch up with development, we have to catch up in education first,â€ he said.
Ambassador Youming urged pupils not to be discouraged by their humble backgrounds, adding that there are many people with similar backgrounds but have excelled in life.
He said he was prompted to make the donation after watching Mr Kalaba on TV inspecting classrooms in the constituency.
â€œI called the Minister of Foreign Affairs and asked him whether the embassy and I could do something in contributing to the development of Chofoshi School,â€ Ambassador Youming said.
The ambassador told the people of Bahati that education is the key to development of any country.
And speaking at the same event, Mr Kalaba thanked ambassador Youming for the donation and emphasised the importance of education in development.
Mr Kalaba, who is also Bahati member of Parliament, urged pupils to learn computer technology, adding that the world today revolves around ICTs.
â€œThe Zambian government has always enjoyed cordial relations with the Chinese government. For us, the 10 computers and 10 printers is a new beginning to a new world,â€ Mr Kalaba said.
The minister, who begun his primary school education atÂ  Chofoshi School, told the pupils that he was a good example of humble beginings.
â€œWe want our children to determine the fate of Zambia and for them to determine the future of Zambia; they need to have a better education,â€ he said.
Government, through the Ministry of Education, revised the education curriculum by introducing ICT as a basic subject from grade one to 12.