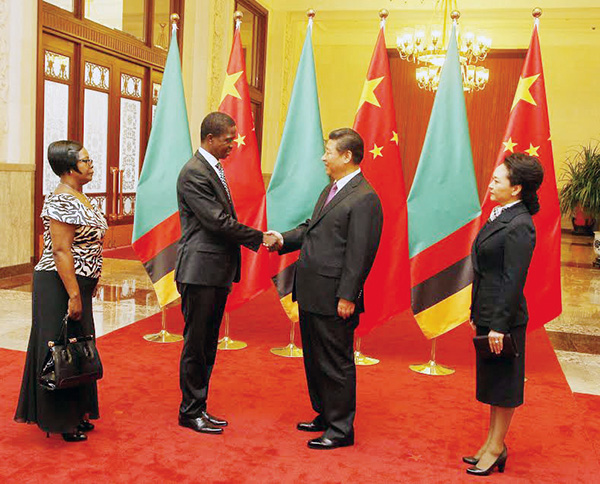 CHRISTINE CHISHA, Lusaka
PRESIDENT Lungu says he will ensure that agreements signed between Zambia and China during his recent state visit to China achieve the intended goals.
Mr Lungu said he is positive that regular meetings between Zambia and China will yield tangible results which will be appreciated by all Zambians.
He said the China visit was fruitful and he is confident that it will yield social and economic development.
Mr Lungu was speaking at State House in Lusaka yesterday when he met a Chinese delegation led by Chinese President Xi Jinpingâ€™s special envoy, Lin Songtian.
The President said Zambia has benefited from the generosity of the Chinese people and cherishes the bilateral relationship between the two countries.
And Mr Lin said China is committed to fulfilling all the promises it made to the Zambian people.
Mr Lin, who is also director-general of the Department of African Affairs, said his governmentâ€™s support will be in mining, agriculture, tourism and human resource development, among others.
The Chinese delegation has been sent by President Xi to consolidate various bilateral and co-operation agreements that were signed during President Lunguâ€™s recent state visit to China.
While in China, President Lungu facilitated the signing of four major investment agreements totalling US$800 million.
The agreements included the expansion of the Levy Mwanawasa Hospital and the setting up of milling plants in all the 10 provinces.