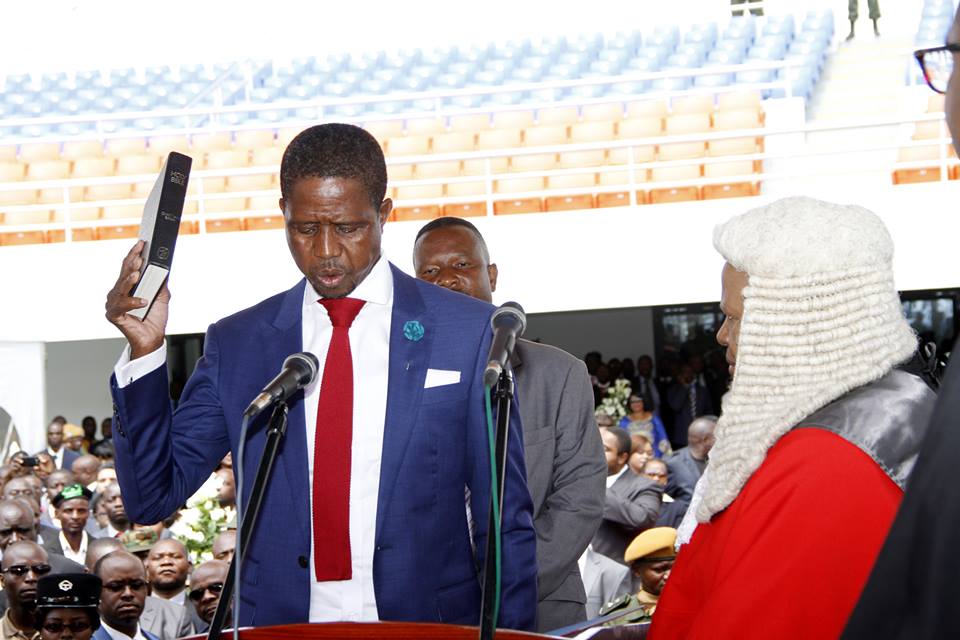 KELVIN CHONGO & JIMMY CHIBUYE, Lusaka
CHINA has extolled President Lungu for being elected Zambiaâ€™s sixth President.
And the Universal Peace Federation (UPF) Zambia chapter has congratulated President Lungu on his election and urged him to embrace all Zambians.
A statement from the Chinese Foreign Ministry released by the Chinese embassy in Lusaka yesterday states that â€œZambia is a traditional friend and an important cooperative partner of China in Africa.â€
The statement further states that the two countries have been trusting and supporting each other and carrying out fruitful cooperation in various fields.
â€œThe Chinese government attaches high importance to developing China-Zambia relations and stands ready to make concerted efforts with the Zambian side to elevate bilateral relations of friendly cooperation,â€ the statement reads.
And President of Egypt Abdel Fattah Al Sisi has congratulated President Lungu on his election as Zambiaâ€™s sixth president, reports CATHERINE MUMBA.
He said in a letter yesterday that President Lunguâ€™s victory reflects the deep trust Zambians have in him to achieve the development and progress they desire.
â€œAs I am sharing with your people this trust, I express Egyptâ€™s support for you in the walk of the development of your country and all African countries,â€ he said.
President Sisi also commended the historical relations and deeply-rooted ties between the two countries, adding that he looks forward to enhancing these relations and promoting means of expanding mutual cooperation in all fields.
And the UPF has hailed Zambians for exercising their right to vote for a leader of their choice in a peace, fair and democratic manner.
UPF chapel secretary general Rudolf Faerber said in a statement yesterday that the election of Mr Lungu and returning the Patriotic Front (PF) in office shows that Zambians trust the ruling party.
Reverend Faerber said the PF should now satisfy Zambians by working with the people to meet their needs and keep the trust.
Rev Faerber said President Lungu should consider offering an olive branch to other parties that participated in the January 20 presidential election so that they can participate in developing the nation and promote unity.
Rev Faerber urged the losing candidates to â€œsoldier onâ€ and continue working hard because it is not â€œthe end of the dayâ€.
He said politicians should forget about political rivalry exhibited during campaigns and support each other for the sake of developing Zambia.
Rev Faerber said the decision to allow for a smooth transition of power is an indication of maturity and democracy.
He commended President Lungu for appointing Nalolo Member of Parliament (MP) Inonge Wina, who is the organisationâ€™s ambassador for peace, as Vice-President.
The Islamic Supreme Council of Zambia president Suzgo Zimba has applauded President Lungu for maintaining that Zambia will remain a Christian nation.
Mr Zimba said an interview yesterday that Zambia remaining a Christian nation will help raise moral standards because people will live according to the word of God.
â€œWe are glad that the President recognises Jesus as his guide. It makes us happy as Muslims because we believe in Jesus too,â€ Mr Zimba said.
Evangelical Fellowship of Zambia executive director Pukuta Mwanza has appealed to President Lungu to strengthen Christianity in the country by including Bible teaching in the school curriculum.
Rev. Mwanza said in an interview yesterday that religious education is not enough because it encompasses all religions.
â€œAs a Christian nation, we need our children to learn the Bible as a subject in schools so as to build up their moral standards,â€ Rev Mwanza said.
The Cheke cha Mbunda cultural and Writers Association has hailed President Lungu for appointing Inonge Wina as republican Vice-President.
National chairperson Bosco Chiyengo said in a statement that his association is elated to see Mrs Wina elevated to the countryâ€™s number two position.
University of Zambia Gender Studies Association (UNZAGESA) has hailed President Lungu for appointing Mrs Wina as Zambiaâ€™s first female Vice-President.
UNZAGESA president Sylvester Shipolo said in a statement yesterday that it is the hope of UNZA gender students that Mrs Wina will set out and support the desire of foremothers who were behind the promotion of gender.
The Federation of Free Trade Unions of Zambia (FFTUZ) chairperson for womenâ€™s affairs Charity Tembo has also congratulated Ms Wina on her appointment as vice-president.
Ms Tembo said in a statement that FFTUZ prayer is that Ms Wina should be equal to the task so as to show the men folk that women can also perform even better.