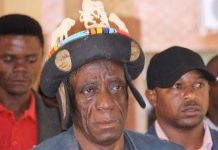 Hichilema and five others who have been charged with treason were on Friday transferred from Lusaka Central Correctional Centre to Mukobeko Maximum Security Centre in Kabwe.
Mr Moonga said in a statement issued yesterday that the traditional leaders must be reminded that there have been several citizens of influence before that have been arrested for treason and other offences.
“I have in mind our first republican President Kenneth Kaunda, who was detained at the same prison on Christmas Eve but these chiefs never even sent messages of goodwill to Dr Kaunda until he was released,” he said.
Mr Moonga said Dr Kaunda is a high-profile political hero for the whole African continent who befits the attention that chiefs Mukuni and Hamusonde have accorded to Hichilema.
“I have great respect for my two parents, chiefs Mukuni and Hamusonde, but they have left me stranded in terms of the direction they are taking. I feel embarrassed that my parents from Southern Province were able to stay in their palaces when other former political heavyweights were detained but have found it ideal to camp in Kabwe to visit Hichilema,” he said.
Mr Moonga has demanded to know the criteria the two chiefs used to select who deserves to be visited.
He said traditional leaders deserve respect from all parts of the country because they are above partisan politics, unless the action by the two chiefs is an open declaration of their support for UPND.
Mr Moonga said he has great respect for Chief Choongo of Monze who has taken a decision to support to the government of the day, a move which is expected of any traditional leader.
“I challenge the two traditional leaders to stop this partisan conduct and concentrate on leading their people instead of opening themselves to political lives,” he said.
Mr Moonga said he has nothing against chiefs visiting those in trouble within the law.
“I have everything against being selective especially where reasons for such a selection are questionable,” he said.