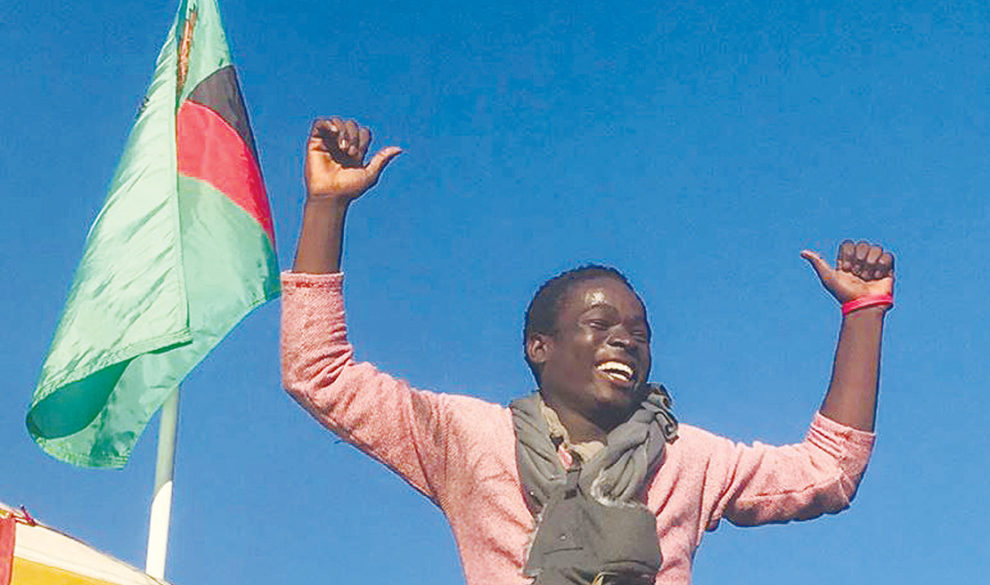 KELVIN KACHINGWE, Lusaka
PATRICK Chikoloma, who grew up in the notorious slum of Chibolya in Lusaka, has become the first-ever African to be selected for the world-famous Circus Smirkus in

Vermont, USA, an award-winning international youth circus.
A member of Circus Zambia, Patrick has joined the youth circus at its 2017 Big Top Tour, celebrating its 30th anniversary of bringing the centuries-old tradition of the travelling circus to towns all over the Northeast in the United States.
The travelling circus will perform 67 shows, travelling from the mountains of Vermont to the shores of Maine, with stops along the way in Massachusetts, New Hampshire, and upstate New York. Thirty budding circus stars, ages 12 to 18, are bringing youthful exuberance and polished circus skills from all parts of the country and the world.
This year’s troupe hails internationally from Zambia and Canada, and from 13 states – California, Illinois, Massachusetts, Maine, Minnesota, Missouri, New Hampshire, New Jersey, New York, Rhode Island, Virginia, Vermont, and Washington. The 2017 Big Top Tour is on the road through mid-August.
The tour continues the practice of Smirkus’ yearly theme-based shows with this year’s ‘Midnight at the Museum’ being an adventure through the hallowed halls of a magical museum that springs to life when the clock strikes midnight. The show is featuring young aerialists and wire-walkers, clowns and jugglers, live music, brilliant costumes, and the many skills of its young circus artists on full display under the Big Top.
Circus Smirkus is the only American youth circus to travel ‘under canvas’; that is, the only one to put on a full-season tour under its own big top – a 750-seat, one-ring, European-style tent. The ring engages the entire audience intimately – no one sits more than 25 feet from the ring – giving an up-close view of the young ensemble’s extraordinary aerial artists, contortionists, acrobats, jugglers and whimsical clowns at work.
The touring company consists of some 80 people including the performers, coaches, counsellors, costumers, tech crew, tent crew, circus chefs and a live circus band. The tour caravan requires 23 support vehicles: five equipment trucks, three equipment trailers, four bunk trailers, seven pickups, three passenger vans and one “pie car”, where the meals are made. It takes eight hours to set up the big top, backstage and concession tents, and to prepare and organise 200 costume pieces, 100 props, 70 spotlights and a mile of electrical cable.
Together with Circus Zambia, Patrick toured in the US last summer as part of a youth circus exchange with Upper Valley teens.
“There he was invited to see Circus Smirkus who was on its 29th summer tour. At Circus Smirkus, Patrick had an opportunity to meet some of the young performers, coaches and directors. He was encouraged to ‘try a few tricks’ in the ring and his talent caught the eye of Circus Smirkus founder, Rob Mermin, and executive director Ed LeClair. They suggested he should consider auditioning for next year’s tour,” Circus Zambia executive director Charlotte Groen told the Weekend Mail in a statement.
As fall began, Patrick found himself back in Zambia dreaming of Circus Smirkus.
“I thought that if they found out that I come from Chibolya, they would tell me they had no place for me… I also had no way to pay the costs of travelling back to America. But I decided to try,” according to the statement.
With the help of Circus Zambia, Patrick submitted his audition video, completed his interviews via Skype, and held his breath.
“Out of the thousands of young circus performers who auditioned for the Big Top Tour, Patrick was one of nine who were cast. Although not the first non-American youth, he is the first African ever to be cast for the tour,” Groen says.
“This is extra special because this year is Circus Smirkus 30th anniversary tour. In order to raise the funds to pay for his flights, his Upper Valley Family stepped up with bake sales, fund-raising events and generous donations to make it possible for him to accept the offer and travel back to America to train and perform with Circus Smirkus.
“After more than a month of intensive training the show premiered on the 2nd of July 2017. This was the first of its tour which consists of more than 65 shows all over the USA. On this special occasion Patrick was invited to raise the Zambian flag on the Circus Smirkus tent while the Zambian national anthem was played by a live band.”

TagsChibolya circus selection gets US Youth