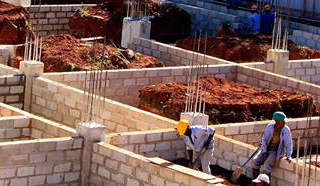 CHARLES CHISALA, Chembe
THE construction of the new township in Chembe district in Luapula Province is progressing well with all but two projects at between 20 and 85 percent towards completion.
This came to light when district commissioner Simon Lwando recently toured the construction site for the new township.
Mr Lwando was happy to find that the construction of the district administration offices has reached 65 percent and commended the contractor, Bellview Tools, for the seriousness it has exhibited so far.
Bellview Tools general foreman Victor Kabamba told Mr Lwando that work was progressing well and that all the workers were on site.
â€œAs you can see, we are at ring beam level. We are remaining with only three courses before we start the roofing. We have done 65 percent of the works so far,â€ Mr Kabamba, who took Mr Lwando around the site, said.
Builders were found working on different sections of the complex, which will house several government ministries and agencies once completed.
At the construction site for 10 medium cost houses general foreman Wilberforce Simwanza said the works had reached 20 percent.
Stone King Construction Company is building the 10 pool houses for civil servants.
Mr Simwanza said the construction began in February and is expected to be completed in eight months.
â€œWe are at 20 percent. We would have done even better but we are facing some delays in the delivery of building materials by our supplier,â€ he said.
And Elios Limited, which is building the police station and eight staff houses, said it was on schedule.
Site supervisor Binwell Mwape said the K12 million project was expected to be completed in 52 weeks.
â€œWe are on schedule. We have done the slab for the inmates section, the office for the officer-in-charge is at ring beam level while the CIOâ€™s office, traffic section, reception and kitchen are at sub-structure level,â€ Mr Mwape said.
Jemuro Xtrade Construction Company, which is building 20 low cost staff houses for civil servants has done 85 percent of the works.
Site foreman Luckson Mwafweni said the project is expected to be completed in 10 months.
And Mr Lwando has expressed satisfaction with the pace of the construction and quality of works.
â€œThis is what we expect from local contractors. I am happy with what I have seen so far. Almost all the projects are progressing well,â€ he said.
Only the construction of the civic centre, two VIP houses by Techtrim Limited and the post office by Dodoâ€™s General Dealers has stalled.
Chembe was declared a district in 2012.