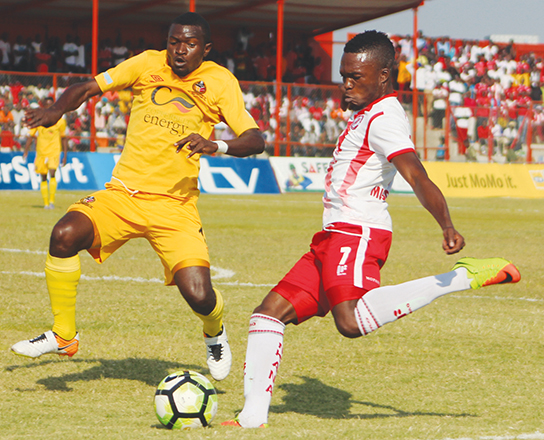 “It is a painful loss but I am impressed with my team. We are still in contention for the league title. I cannot lose two games in a row. I am big coach, we will win the next one,” said Chambeshi, who replaced Zeddy Saileti last Tuesday.
Shadreck Musonda blasted with his left past goalkeeper Allan Chibwe in the 18th minute.
Power midfielder Fwayo Tembo’s clearance outside the box was chested by Shadreck and before the ball could drop to the ground, he unleashed a screamer past Chibwe sending Chambeshi and the fans into frenzy.
Against the run of play, Power levelled through Martin Phiri on 41 minutes.
Defender Govenda Simwala fed Fwayo, who laid a through-ball for Phiri to beat goalkeeper Kelvin Malunga with a low drive.
Thirty seconds in the second half, Phiri put Power ahead after pouncing on a defensive lapse and the win took Power to the top with 20 points, at par with Lusaka Dynamos although the Kitwe side has a better goal aggregate.
Nkana midfielder Jacob Ngulube rattled the cross-bar after Shadreck and Walter had combined on the half, hour mark.
Walter headed wide Joseph Musonda’s thrown-in on 39 minutes.
Chibwe parried Walter’s free kick in the 68th minute as Nkana pinned Power.
Chambeshi, who guided the under-20 national team to the quarter-finals at the FIFA South Korea World Cup, introduced Ronald Chibwe and Austin Muwowo for Ronald Kampamba and Simon Bwalya, respectively, in a bid to equalise but the Power defence was resolute.
“We have been preparing for this match for ten weeks. It is a good win,” Power coach Dan Kabwe said.
Nkana are eighth on the log with 16 points.
EAGLES 1 NAPSA 1
Napsa Stars missed an opportunity to reclaim the top position after battling to a draw with Green Eagles at Independence Stadium in Choma, JIMMY CHIBUYE reports.
Midfielder Prosper Kalenga drew first blood nodding in Mwila Phiri’s corner on 22 minutes.
Eleven minutes later, referee Joseph Jere awarded Eagles a penalty after Luka Banda hacked Claude Bwalya, and Phiri scored the resultant kick.
Jere ruled offside Eagles’ Anos Tembo’s goal in the 49th minute.
Fifth-placed Napsa have 19 points at par with Zanaco and Zesco United, who were not in action yesterday. Eagles have 12 points.
WANDERERS 2 ARROWS 1
Rejuvenated Mufulira Wanderers stunned Red Arrows to climb to 18th position on the table, MULWANDA LUPIYA reports.
Ghanaian forward Rahim Osumanu’s close-range strike beat goalkeeper Danny Munyao in the eighth minute at Shinde Stadium in Mufulira.
Referee Michael Lyalabi awarded Wanderers a penalty after defender Webster Mulenga tripped Ben Chengo, and Guily Manziba sent Munyao in the wrong direction on 63 minutes.
Arrows midfielder Bruce Musakanya pulled one back in the 76th minute.
Wanderers, who were winning for the first time this season at home, have ten points, eight behind Arrows.
Nakambala Leopards and Buildcon battled to a goalless draw in Mazabuka.
Today, Green Buffaloes take on Kabwe Warriors at Edwin Imboela Stadium in Lusaka and City of Lusaka host Real Nakonde.
In a double header at Konkola Stadium in Chililabombwe, Nchanga Rangers tackle Nkwazi in an early kick-off and Konkola Blades and Forest Rangers will take to the field later.

Were to miss Libolo tie, Zanaco off to Cameroon
Buchi boys slaughter Buffaloes