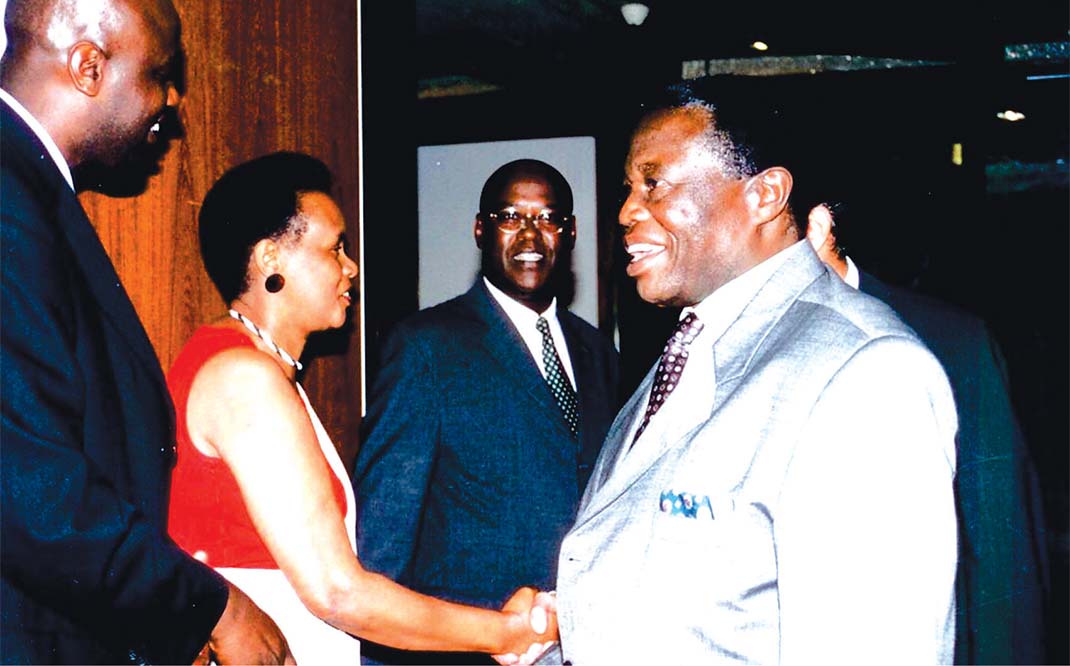 LUBAMBE CHIKAMBA, MUMBA CHIKAMBA, Lusaka
ENOCK Yotam Chipulu Chikamba was born to Yotam Chabu Chikamba and Helen Mwape Kasela on January 15, 1936 in Chief Mulakwa Village in Kapata Peninsula of Samfya district in Luapula Province. He was the second born in a family of five.
He started education at Samfya Mission School before going to Mansa Government School. It was in Mansa that he met friends like Peter Chanshi and a Dr Lumbwe Chiwele. He completed his Standard Six Upper in Mansa and then proceeded to Kasama Secondary School in Northern Province where he met a long time friend, Professor Chifumbe Chintu.
He proceeded to Chalimbana Teachers Training College where he was from 1955 to 1957.
Ambassador Chikamba returned to Samfya and taught at Samfya Primary School where he was a teacher up to 1960.
In 1957, he married Micah Mumba upon his return to Samfya after Chalimbana to start his family life. The two were blessed with seven children, 13 grandchildren and two great-grandchildren.
He then went to Mwenda Primary School where he served as headmaster from 1960 to 1964. He pursued his education with GCE in mind and with the help of books from Mr. Francis Kaunda who later became Zambia Consolidated Copper Mines (ZCCM) top man. He proceeded to Makerere University in Uganda as his wife went to Kitwe Teachers Technical College.
When he returned from Makerere University, Ambassador Chikamba went to Kitwe Teachers Training College in 1964 where he taught sciences to current personalities like Deputy Speaker of the National Assembly Mkhondo Lungu.
Ambassador Chikamba later went to the University of Zambia (UNZA) in 1966 where he was a student up to 1970. He was the first president of the University of Zambia Students Union (UNZASU).
Soon after completing his studies at UNZA, he took up the appointment of deputy chief education officer for Lusaka. He was moved to Kabwe in the same position and later returned to Lusaka as chief examination officer. He was the one who set up the current Examinations Council of Zambia.
Ambassador Chikamba was in detention from February to August 1972, for political charges he was later acquitted of. He refused to go back to work in the Ministry of Education and was helped to start up in transport business by his close relations. With time, he also acquired a farmland in Lusaka.
In November 1973, he moved with the family to the farm in Lusaka West where he engaged in poultry, piggery, field crops and vegetables. It was a mixed sort of farming that also reared ducks, geese, turkeys and later beef animals. A sizable orchard was also in place.
By 1982, he set his eyes on Luapula Province where he relocated to and started a farm with the support of his wife and children. Maize and soya beans were the main crops he grew alongside some vegetables and cassava. The beef animals in Lusaka West later found their way in Mansa and Samfya.
By 1985, involvement in co-operatives started with Fishokoto Co-operative, then Luapula Co-operative Union where he became chairman. He was then on the board of directors of the Zambia Cooperative Federation. He would later become chairman of the Co-operative Bank as well as chairman of the Co-operative College.
After 1991, he became Samfya District Council chairman, and all the while, efforts continued to establish the Luchidashi Farm. He was involved in agency with premium oils distributing soap and cooking oil and in maize marketing, and also provided the services of a number of grinding mills in Samfya district.
TIMELINE
1997 – After 1996 elections, he was nominated as Member of Parliament and later elected chairman of the Parliamentary Committee on Agriculture over which he presided for two years.
1999 – Appointed deputy minister of Agriculture.
2002 – After the 2001 elections in which he stood as an independent candidate, he was appointed as High Commissioner to Kenya and represented Zambia in Sudan, Seychelles, Eritrea, Chad and Israel.
2005 – He was appointed Ambassador to Libya to set up the embassy there. He was Zambiaâ€™s representative to Algeria, Tunisia, Morocco and Saharawi Republic.
2007 – He resettled at the farm in Lusaka West to reorganise old properties and to venture into new enterprises. He pursued this even into his last few years of sickness.
2010 – He was diagnosed with cancer and underwent treatment. He did well under treatment until the end of 2014 when it was discovered that the cancer had spread widely, and it left him restricted to a wheelchair and bed. He struggled with the illness until he succumbed to the disease on April 10, 2015.
Ambassador Chikamba was an elder for 40 years up to the time of his passing. His social life was a lively one which included photography, playing and watching soccer in his earlier years. This was done around his family.
The celebration of Ambassador Chikamba life will be done at a memorial service and the unveiling of the tombstone at Leopards Hill Memorial Park in Lusaka tomorrow, Saturday April 16, 2016 from 10:00 hours to 12:00 hours.
The authors are Ambassador Chikambaâ€™s children.