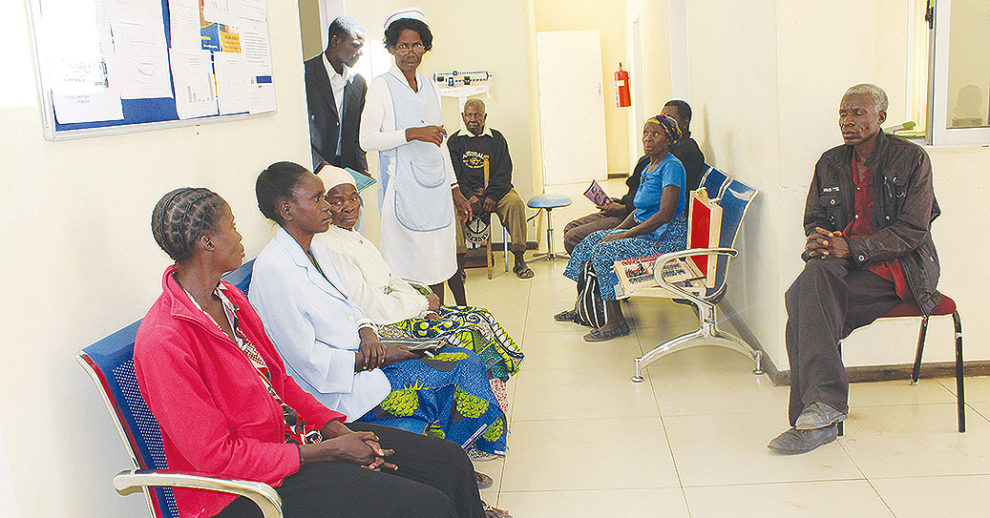 MELODY MUPETA, Kitwe
THE importance of good eye sight to an individual cannot be over-emphasised.

Good eye-sight helps students to read and prepare for examinations, motorists to drive their vehicles safely, tailors and designers to design their clothes and many more other things.
However, eye problems are still a challenge to many people in the country with cataract being one of the most common eye diseases that the eye wing at Kitwe Teaching Hospital (KTH) records.
Cataract is a condition in which the lens of an eye becomes white as a result of the increase in age, injury to the eye or as a result of other illnesses such diabetes and HIV.
The condition mostly affects aged people and children and makes them see blurred images.
There are different types of cataract conditions that are categorised according to the part of the eye that is affected.
The Posterior affects the back of the eye, the nuclear cataract causes the centre of the eye to be yellow while the cortical cataract is wedge-shaped and forms around the edges of the centre of an eye.
Rose Munshya, 71, of Lufwanyama district on the Copperbelt, who had cataracts in both of her eyes explains how she woke up one day and thought she had lost her eye, sight because she could not see clearly.
Ms Munshya, who recently underwent surgery at KTC eye ward, said the cataracts had affected her life in that she was unable to do most of the chores at home because of her low visibility.
She said she never thought of seeking treatment for her cataracts because she thought the condition had no cure, until she obtained information from the community health assistants about the disease and its treatment.
“I remember waking up one morning only to discover that I was unable to see clearly. I went to wash my eyes hoping that the problem could go away. I was ignorant about my condition, which I thought could not be cured,” Ms Munshya said.
She said through sensitisation programmes that were conducted by the community health assistants, she came to know more about the disease and had to seek treatment at the eye ward.
Ms Munshya said she is now able to see clearly thanks to the KTH eye ward, which had conducted the surgery.
Monday Mwape, 37, is a diabetic patient who also had cataracts and has commended Government for equipping the eye department in Kitwe with equipment and specialist medical personnel to handle eye problems.
Mr Mwape says the cataracts in his eyes had affected his social life because he was unable to do most of the chores at his house.
“I had cataracts because of the diabetes which I have. It was difficult for me to live a normal life because my vision was not clear,” he said.
Cataract is one of the leading eye diseases that cause blindness in human beings.
Mr Mwape, who recently underwent surgery at KTH eye ward, is optimistic that the procedure will be a success because the health workers that attended to him are eye specialists.
And KTH eye ward consultant ophthalmologist Lillian Musonda says the eye wing conducts 3,500 eye surgeries annually, of which 2,000 are on people with cataracts.
Dr Musonda said the figure clearly shows that cataracts affect a number of people.
She said cataracts also affect children who are born from mothers infected with syphilis.
Dr Musonda said annually, the wing performs 206 surgeries on children.
She said people from North-Western, Luapula and Eastern provinces all seek treatment at the eye ward, which only has four ophthalmologists.
“The response from the number of people accessing the service is overwhelming because we receive people from various provinces just for them to have access to the eye care services that we offer,” Dr Musonda said.
She appealed to Government to consider upgrading the facility into a stand-alone hospital because currently the eye wing department depends on KTH for financing and human resource.
Dr Musonda said once the wing is upgraded, the eye unit will be able to have its own budget and its own personnel, who will specifically be stationed at the eye wing.
She said despite the challenges they go through, Government has equipped the facility with state-of-the-art equipment to ensure that eye surgeries are successfully conducted.
The department is equipped with a slit lump to detect cataracts, an advanced microscope, which is used during surgery and other medical equipment.
Dr Musonda also said the institution faces the challenge of shortage of consumables because of the number of surgeries that it performs.
She appealed to Government to ensure that public health institutions that perform eye surgeries are fully stocked with all the consumables that are needed for their smooth operations.
Dr Musonda said the eye is a very sensitive part and that any harm that is caused to it can cause extensive and irreversible damages that can lead to blindness.
She said people should ensure that they take care of their eyes and go for annual eye check-ups to prevent eye conditions that can lead to blindness.