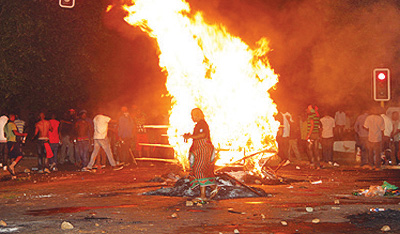 WE STRONGLY condemn George township residents who went on rampage and burnt down a police post, a facility to which they run for help in dire times.
This conduct, to say the least, is unreasonable, and goes to show how much of a danger we are to ourselves. These culprits should be brought to book.
Police are always there to protect residents and safeguard property.
By their action, the residents have banished the help they want from the police and now they remain vulnerable to crime and other vices.
They have no one to blame but themselves when help does not come at a time they most need it. Where on earth do they expect the police to operate from and do they expect the police to feel safe in the midst of the rampaging?
The residents in the densely populated township went on rampage on Thursday after word went round that the suspects who were alleged to have committed gruesome murders earlier in the day had been apprehended and were in police custody.
The residents besieged the police post demanding the release of the ritual murder suspects so that they deal with them because police were taking long to handle the case. What manner of thinking!
In the mayhem, the residents burnt down Mwembeshi Police Post and started throwing stones and destroyed vehicles, among them a government truck parked there.
The police have a way of handling cases. They investigate cases to gather all the evidence they need to prosecute a case. They do so to arrive at a conclusion on whether to proceed with a case or not. Meting out mob justice is criminal and defeats the purpose for which the justice system was established.
We know of some cases which have taken long to investigate but this does not mean suspects would be let to go their way.
Let us remember that the police do not use the law of the jungle. The long arm of the law follows a legal process so that the police investigations are thorough to ensure a successful case.
When residents take the law into their own hands, they jeopardise police investigations and now with the burning of the police post, how do they expect the police to continue with the case.
We always wonder why residents resort to such senseless acts of burning down police stations. This latest incident is only one among others that have happened before.
In the past, we have seen police posts in Misisi, Garden, Ngâ€™ombe, and Kafue go up in flames by residents who misdirect their anger to the wrong target altogether, the police.
We expect residents to vent their anger on thieves who cause loss of life and sleepless nights in our communities and so we expect everyone who cares about safety to join forces with the police. And the anger we are talking about is not about taking the law into their own hands; theirs is to be the neigboursâ€™ keeper.
In Zambia, just as in many other countries, the justice system demands that a person is presumed innocent until proved guilty by the courts of law.
Let us support the police because they need our help and we need their help in combating crime in our communities. Residents, on their own, may not have the expertise, to combat crime.
We urge residents to have confidence in the police. Where they are convinced the police are not doing a good job, there are established avenues to seek redress.
We also appeal to police to handle cases expediently but without compromising professionalism. They should make sure they are not found wanting in all their dealings.
Police face a number of challenges in their operations but they have a duty to instill confidence in the residents they serve.

Letâ€™s rise against crime
Media should be respected