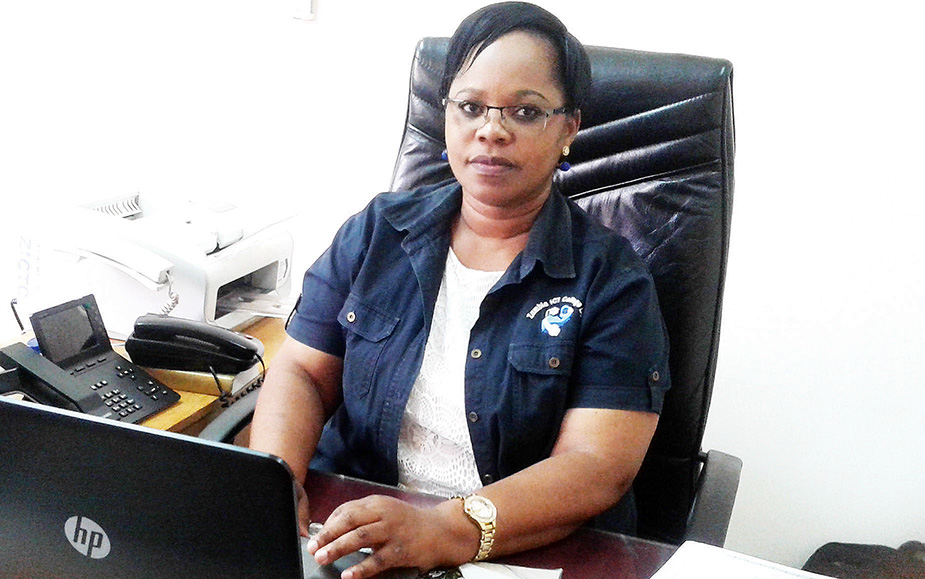 CHARLES CHISALA, Lusaka
WHEN you meet her in her office for the first time she strikes you as a shy, unassuming person.

Betty Shitima Bweupe cuts that unassuming figure of the common working woman you meet in an average workplace.
But let not her simple looks deceive your eyes and cloud your judgement of her.
She is at the helm of one of the institutions expected to help turn the government’s development agenda into tangible benefits for the people of Zambia as espoused by the Seventh National Development Plan (7NDP).
Ms Bweupe is the executive director of the Zambia Information and Communications Technology (ZICT) College and ICT Centre of Excellence in Northrise, Ndola.
The former Zamtel College was handed back to the government in 2010 and has since undergone massive renovations which are making it look like it was built less than a year ago.
The college’s current ‘parent’ is the Zambia Information and Communication Technology Authority (ZICTA) under the Ministry of Transport and Communication.
Ms Bweupe explains that the ‘reborn’ institution was selected to host the Centre of Excellence in ICT training, on which the government has spent US$13 million (about K120 million).
“The government has put a lot of resources into this institution, especially the ICT Centre of Excellence in which it has invested US$13 million. That’s why I want it to maintain its status as the premier of ICT training and capacity building in Zambia and beyond,” Ms Bweupe confided.
The centre has top-notch, state-of-the-art ICT equipment, modern training aids and technology installed by China’s technological behemoth Huawei, which also trained the technical and academic staff.
Expensive equipment, top-of-the-range infrastructure and cutting-edge technology have positioned the ZICT College and ICT Centre of Excellence to become the leader in ICT training in Zambia.
“I am urging public and private universities and colleges offering courses in ICT to take advantage of this state-of-the-art facility for training. We are not in competition but want to collaborate with other institutions of higher learning. We can host an unlimited number of distance learning students through our video and teleconferencing technology,” Ms Bweupe said.
The centre has a massive server room-cum-control unit, spotlessly clean, sound-proofed, high-tech lecture rooms and large, fully-equipped computer laboratory.
“We have top-notch, state-of-the-art ICT equipment, top-notch infrastructure and uninterrupted high-speed internet which other training institutions can take advantage of and leverage on,” Ms Bweupe said.
The 7NDP states on page 81, “Government will accelerate the mainstreaming of ICT in the Zambia education curricula to ensure sustainable development and utilisation.”
President Lungu reinforced this statement when he addressed the Second Session of the 12th National Assembly on September 15, emphasising the critical role ICT is expected to play in accelerating Zambia’s socio-economic development.
“Government has established the Smart Zambia Institute to spearhead the transformation of government operations into a ‘Smart Government’,” he said.
President Lungu announced that Government is implementing an electronic system across all government ministries, and that Cabinet business will soon be conducted under a paperless environment.
Government has also introduced ICT as a mandatory subject from elementary grades to Grade 12, which presents the college with a mammoth task.
But it looks equal to the task. Besides boasting of the capacity of hosting an unlimited number of online or distance learning students and users simultaneously the centre also has:
•Two multimedia classrooms seating up to 100 students in a classroom setting with video-conferencing screens, multimedia audio systems, smart boards and instructor podium for lectures and presentations
•Laptop computers running on windows operating systems and installed with the office suite for use by students during lessons and video conferences
•ICT laboratory with latest technologies in routing and switching, storage, unified communication, WLAN, video conferencing and network security training
•Server room with high-speed server hardware and extensive storage for web services and remote backup with uninterrupted 24-hour internet connectivity protected by multi-level firewalls.
Ms Bweupe wants to leave a legacy in ICT training.
“I look forward to seeing a society where a marketeer can swipe with an electronic debit card or simply use his or her mobile phone to sell tomatoes, second-hand clothes and other merchandise as is the case in other societies,” she shares.
“That is the President’s desire, and that is my desire,” she says.
Ms Bweupe said when the government privatised Zamtel by selling it to Libya’s LapGreen, the new owners handed it over to the State to concentrate on its core business of mobile phone services.
Its name changed from Zamtel College to ZICT College.
Between 2010 and 2014 the college went through a major transition and a focus shift to become Zambia’s number one ICT training institution.
Ms Bweupe was serving as acting executive director then.
Its new mandate extended to helping the country become an electronic society or ‘Smart Zambia’.
“It was at this point that I was appointed substantive executive director of the college,” she said.
What was her reaction? “I felt that the first thing was to change the face of this institution. We embarked on an aggressive programme involving the extensive renovations you have seen with help from ZICTA, which have completely changed its outlook,” she said.
“I saw it as an opportunity to contribute to the management of ICT needs for a ‘Smart Zambia’ by developing the necessary human resource.”
Ms Bweupe holds a Bachelor of Arts with Education, a Master of Business Administration (MBA) and a Master’s Degree in Marketing.
She was born in Luangwa district in July, 1970, to John Shitima Njovu and Margaret Tembo, did her primary school in Chibombo, then went to Katondwe Secondary School in Luangwa and later Roma Girls in Lusaka before going to the University of Zambia (UNZA).
She graduated in 1993 and joined the Northern Technical College (NORTECH) in Ndola as a lecturer.
After stints at several other institutions of higher learning across the country, Ms Bweupe found herself at the Zamtel College, where she is now spearheading ICT training and managing the ICT Centre of Excellence for which she has big plans.