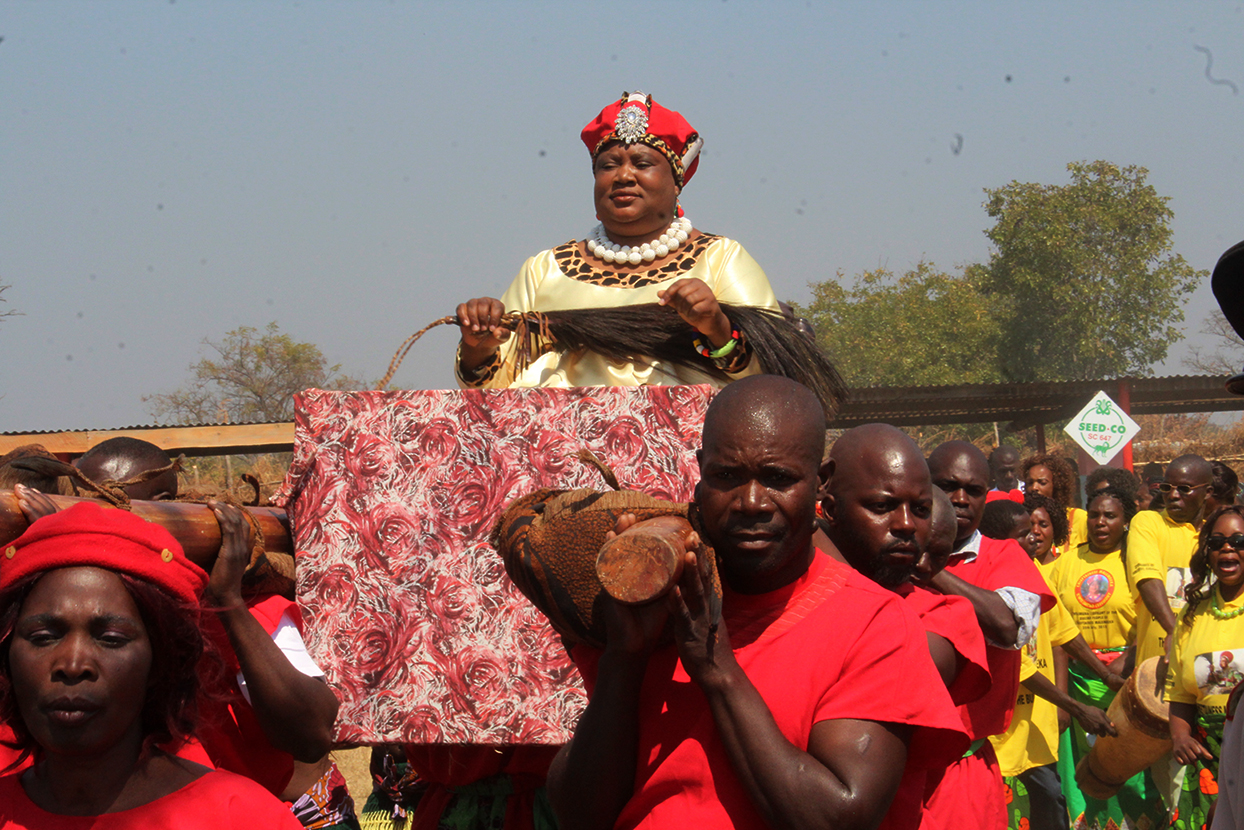 STAFRANCE ZULU, Mpongwe
WHEN Chieftainess Malembeka, the seventh in the lineage of the Bulima chiefdom, made her way from her palace to the arena, lifted by her bearers, she was joined in the procession by invited dignitaries, a legion of girls and only two boys and women who were in full swing dancing.
The venue was Ichipembwe area in Ibenga, Mpongwe and the occasion was the ninth edition of the Kwilimuna traditional ceremony [harvest festival] of the Bulima people of Mpongwe district on the Copperbelt.
As the chieftainessâ€™ entourage made its way into the Ichipembwe arena, seeds were scattered as a symbol of the continuing cycle of growth, harvest and planting.
The spectators, the majority subjects of the chiefdom, screamed in appreciation of their leaders who had ensured they had grain in their barns for another year.
After the revellers danced round the ripe masaka [sorghum] plant that was sunk in the ground to symbolise a field from where crops would be harvested, some sorghum was presented to the chieftainess by an elderly woman in what was an obviously well-rehearsed show piece.
It was a three-day ceremony although its climax was on the final day when the chieftainess and other dignitaries joined in the celebrations.
On the first day, visitors gathered as food preparations begun in the midst of traditional music and dancing. The second day continued with food preparations, feasting, traditional dancing and sketches whose themes sometimes touched on HIV/AIDS prevention and the importance of looking after orphans and widows.
The third day was when the chieftainess and the invited dignitaries joined in the festivity.
Other than a variety of entertainment on offer, this was also when the history of the Bulima tribe was told.
The traditional activities included an initiation ceremony, during which the girls who have come of age were instructed on various duties, such as how to light a fire without matches.
Well, anyone would want to learn that even outside the Kwilimuna traditional ceremony.
This yearâ€™s Kwilimuna ceremony, held from July 22 to 24, was graced by Vice-President Inonge Wina.
Also present at the ceremony was Tasila Lungu.
And here was the revelation; both Tasila, President Lunguâ€™s daughter and Mrs Wina, have ties in Lamba land from their maternal sides.
Tasila, highly praised in social circles for her African sense of style and fashion, received an award from Chieftainess Malembeka, regarded as the honourable head of the Bulima people, on behalf of Chilenga village for promoting good health in the village.
In her speech, Mrs Wina emphasised the need for peace and co-existence among communities regardless of their political affiliation.
It was a timely message, particularly at the time the country is heading to an election and the ugly face of political violence has reared its head leading the Electoral Commission of Zambia (ECZ) to cancel campaigns in certain areas of the country for 10 days. The affected districts were Lusaka and Namwala in Southern Province.
The message of peace and unity is one that was also emphasised by Chief Lumpuma in a vote of thanks he gave on behalf of the seven other traditional leaders who attended the ceremony.
Chief Lumpuma challenged politicians to take a leaf from chiefs who he said were united as evidenced by a number of them attending the Kwilimuna traditional ceremony.
Anyhow, the Vice-President, in her speech, also outlined various development projects currently being undertaken in Mpongwe including the Chisapa Health Post which she had just commissioned on the final day of the ceremony.
The health post is located some 45 kilometres from Mpongwe, formerly a part of the Copperbelt provincial capital, Ndola.
But during the three-day Kwilimuna traditional ceremony, Mpongwe or Ndola were not the focus; this was about celebrating a rich traditional culture of the Bulima people.
The Bulima people originated from a place called Kola between Angola and the Democratic Republic of Congo (DRC) in the 1600s. They were led to settle at a place called Chowa in Zambia by their first chief, Mpulumba, around 1700s before settling at their present place – Mpongwe.
However, it is the second chief, Lyobeka, who made significant acquisitions of land and established boundaries with neighbouring chiefdoms in what is largely the shape of the chiefdom today.
But at the ninth edition of the Kwilimuna traditional ceremony, Chieftainess Malembekwa was the main focus.
At the same ceremony, she performed a long ritual dance after she had paid homage to the fallen chiefs. During her dance, she was joined in spontaneously by other dancers.
Eventually, she was led to her seat by her husband Christopher Mutembo. Her second return to the arena was when she installed 10 Sulutani [headmen and women].
Simply put, the Kwilimuna traditional ceremony had everything; speeches, sketches, drumming, dancing, singing and some comedy by the master of ceremonies.
There was a lot to take home with; you should have seen the drummers drumming their drums as if their whole existence depended on that, or the girls demonstrating an ancient way of crushing sorghum into sorghum meal-mealie using a stone inflicted over the other.
That is the Kwilimuna ceremony for you.

August 11, what are the expectations?
Young men, beware of prostitutes