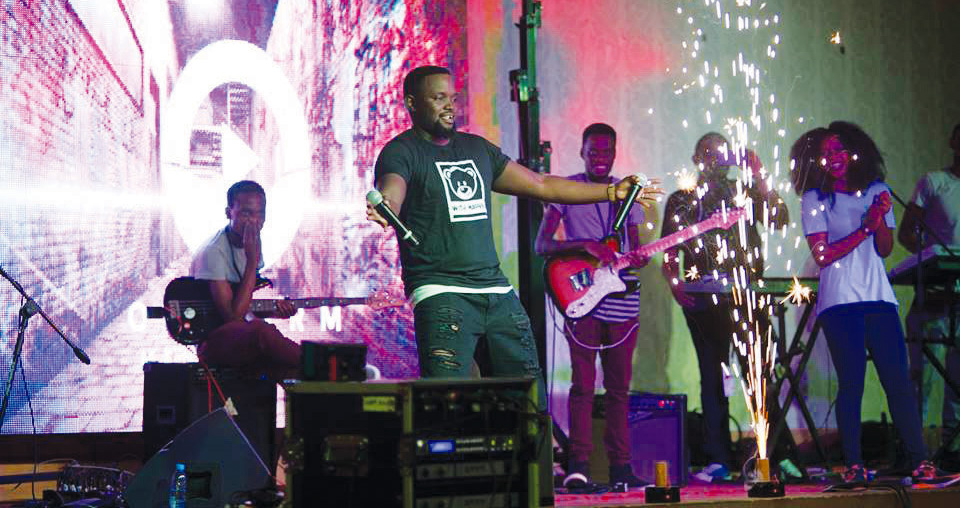 ZIO MWALE, Lusaka
GOSPEL musician Mag44 led hundreds of fans in an overwhelming live music and prayer session in what he had dubbed ‘Mag44 All Out’ end-of-year concert at Government Complex in Lusaka last week Friday.

The concert, organised by Retunes, and the hip hop artiste and producer, did not disappoint as he delivered a good live music performance which was accompanied by energetic dance moves and some kind of bicycle acrobats from his dance group.
With some of the VIP seats empty, the show started at exactly 19:00 hours, but before the main act by Magg44, there were some amazing poetry recitals on stage.
Later, Geo was on stage with a concert theme song titled All Out; the song was basically talking about the love of God and what good things he can do in one’s life. By that time, VIP seats were fully occupied.
Different act s took the stage including The Proof and Microphone 7 who seems to be the youngster’s favourite. Though not too good with live music, the two up-and-coming musicians thrilled the audience with their hit songs Only God Can Be Your Blesser and Me I Follow.
Trinah, Tio, Ephraim, Manasseh and Esther Chungu were also part of the lineup of artistes to grace the stage.
Trinah, Tio and Esther Chungu performed remarkably well; Esther Chungu performed the song Jehovah while Tio did Chikondi while Trinah sang Never Leave Me.
After all these, Mag44 went on stage at around 20:00 hours. He stormed (literally) the stage with his playful song Kambushi Kalilalila. The audience, which was a mixture of different age groups, was excited especially with the acrobatic dance moves by his team.
With backing from Natasha, Solomon and Faith, Mag44 performed songs like Mwentula, Sux, Me I Beat, Vichani, Swag, I Found Love, Neighbour, Ipongoloke, Good, One Hit Wonder, Shine and Wave, Brave Only and You Never Leave Me featuring Trina.
After an hour of energetic performances, Mag44 shared the gospel and how he has been inspired by 2 Timothy 1:7.
He explained that God has given power to everyone to rise above trials and tribulations.
“God wants us to be brave only, he wants us to live a life without fear, we need to grow into trusting in God for anything,” Mag44 preached at his event.
That is why his music is called Brave Only.