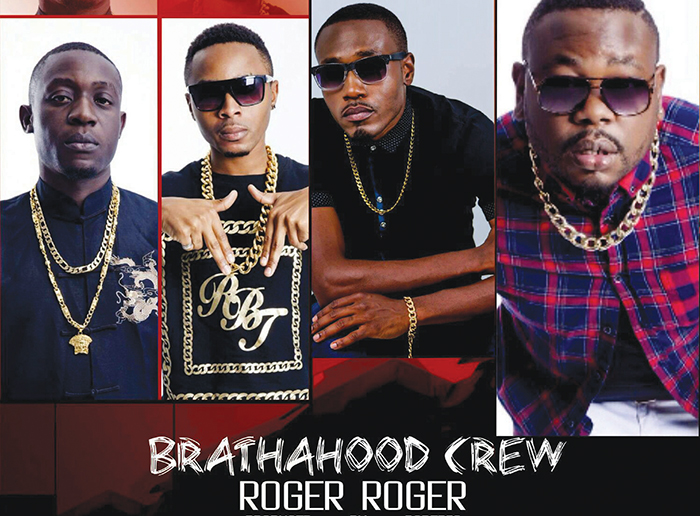 KELVIN KACHINGWE, Lusaka
BRATHAHOOD Music, a recording company founded by brothers Roberto and General Ozzy, has released a new single titled â€˜Roger Rogerâ€™, which they will also be premiering at the African Music Concert today in Johannesburg, South Africa.
The love song, which has close to 10,000 downloads already, is produced by Roberto and General Ozzy, and also features Mandela and Kaufella.
General Ozzy told the Weekend Mail in Lusaka siblings are happy with the response the song has already garnered in countries like Namibia, Botswana, Uganda, Zimbabwe and Rwanda.
â€œWeâ€™ve been motivated by the response so far. It means people like what weâ€™re doing. We can only say thank you for the support, particularly for this song,â€ General Ozzy, who won the Ngoma Awards for Most Promising Male Artiste and Best Collaboration with Kâ€™Millian for the song â€˜Nimusangaâ€™, says.
â€œWeâ€™ll now be premiering the song at the Africa Music Concert this weekend in Johannesburg.â€
In celebrating African Unity, the VAS Company South Africa and MComm Solutions and Services Limited Nigeria have come together to bring 18 big headliners on the continent for the first edition of the annual African Music Concert 2015 at the Nasrec Expo Centre, Johannesburg
Countries being represented are South Africa, Kenya, Nigeria, Tanzania, Mozambique, Ghana, Zimbabwe, Zambia, Uganda, Cameroon and Angola.
Names expected are Wizkid, AKA, Davido, Flavour, Dama Do Bling, Bucie, Uhuru, Cash Time, Vanessa Mdee, Emmy Gee, Anatii and Runtown.
The rest are Victoria Kimani, Burna Boy, DA Les, Chameleone, Roberto, Simba Tagz, Wax Dey, Darey and Soweto Gospel Choir.
That is the stage on which Brathahood has chosen to premiere â€˜Roger, Rogerâ€™, a love song in which a man appreciates the African lady he has found and is now calling for people to come and see what he has found.
The song is the first single from the project that Brathahood is working on for next year. The video of the song, however, is expected to be out next month.