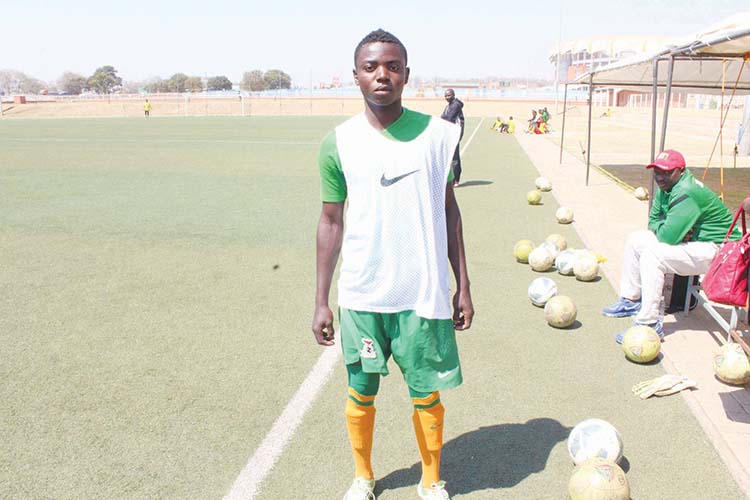 RISING STAR with DIANA MUTAKAFIMBO
HE is a diminutive pacey winger whose presence in the team terrorises not only the opponents but teammates as well.
Watching him, one would envisage watching Zambiaâ€™s all-time best forwards in Godfrey â€˜Ucarâ€™ Chitalu, Peter Kaumba and Kalusha Bwalya among others.
He puts his colleagues on their toes tossing them around with his unique dribbling skills that leave opponents chasing shadows.
Everyone that watched the 2014 Airtel Rising Stars national tournament would remember the name that was prominent in the Luapula Province squad.
Luapula finished second after losing 4-1 to winners Southern Province.
Brandford Chibwe remained a household name throughout the tournament and has proved worthy of a national team material.
His 15-year-old pair of legs are capable enough to compete for honours at national level.
Brandford is part of the under-17 national team preparing for the final round qualifier of the Niger 2015 Africa Junior Championship against Uganda.
Zambia host Uganda next Friday.
â€œBeing called to any national team is not easy, I am just one of the lucky players that get such an opportunity to wear a national team jersey,â€ Brandford says.
BACKGROUND
Brandford hails from Mansa.
He is a product of the Luapula Province Division Two league.
Born on September 3, 1999, Brandford is the first born and only boy in a family of four.
His late father Kennedy Chibwe once played for Super Division side Power Dynamos.
He is currently in grade 11 at Mansa Secondary School.
Brandford attaches great importance to education though his primary focus is football.
He wants to earn his life through the game he loves the most.
â€œYes, I know education is very important and secures your future but I want to live my life through playing football. I just want to finish my secondary school and concentrate on playing football. Thatâ€™s my life,â€ he says.
CAREER
Brandford was introduced to the game by his late father at a very tender age. His love for football found him playing for Kashimoto Academy in Mufulira when he was only eight years old.
When he went to a boarding school in Mansa in 2012, Brandford decided to join Division Two side Young Blues where he was featuring for the youth side before being drafted to the main team.
He is one of the many youngsters that have found themselves in junior national teams through their inspiring performances in the Airtel talent identification programme.
â€œPlaying for the national team was my dream but I never thought it would be now. I found myself in the under-17 national team through ARS and I am happy that my dream has become a reality. What is left of me now is to ensure I progress through to the senior team and I am determined to do just that,â€ he says.
His enthusiasm is what is driving him to reach higher heights and he believes in his abilities that made him reach this far.
Brandford has ambitions of turning professional soon.
His dream teams are Barcelona and Manchester City.
â€œIn life you donâ€™t limit yourself, anything is possible if you are determined. I want to play in Europe and I know I will in future. It is all about determination and courage,â€ he says.
Locally, Brandford wants to follow his cousin Bernard Mapili at Ndola-based side Zesco United.
Zesco is one of the top Super Division sides.
IDOL
Brazilian Neymer da Silva Santos junior is Brandfordâ€™s role model.
Known for his dribbling skills, and scoring with both legs, Neymer currently plays for Spanish giants Barcelona.
Locally, Brandford is inspired by Russia-based national team utility player, Chisamba Lungu.
â€œChisamba is an inspiration to us young players. He is young but making it big at the international scene. I just like his style. I get encouraged every time I watch him play,â€ he says.
For Comments: dmutakafimbo@daily-mail.co.zm, 0955819142.