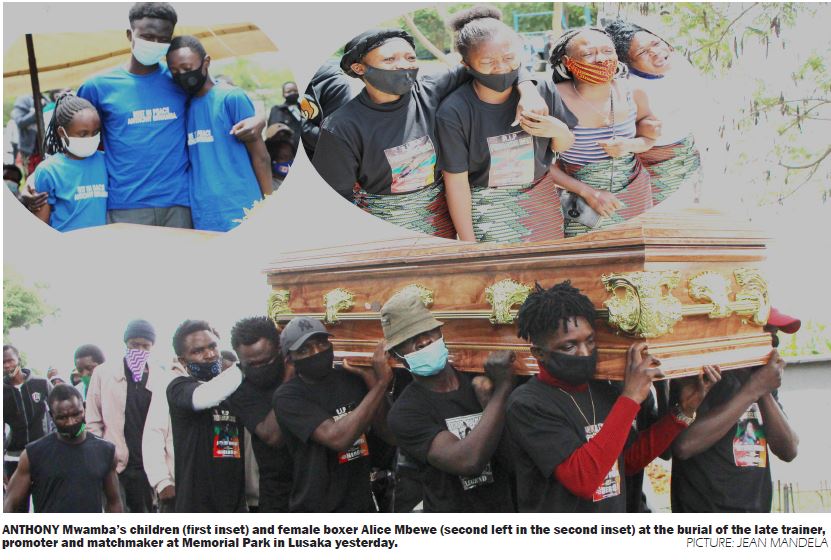 ELIZABETH CHATUVELA, Lusaka
EVEN in these times of the coronavirus when death has become so commonplace, some deaths are hard to comprehend. Like that of Anthony Mwamba, who died on Thursday in Lusaka at the age of 60.
“My brother was just ok until Wednesday morning when he complained of not being fine and we took him to the clinic but went back home after tests confirmed that he had no malaria and was fine,” his sister Charity recounted.
“When we got home, he told me to be strong as all [would] be fine and he assured me that he [would] be ok.  But in the early morning of Thursday, he said he had difficulties in breathing and we rushed him to Levy Mwanawasa Hospital, where he died before he could be examined.”
Yesterday, he was put to rest at Memorial Park in Lusaka.
The burial was restricted to only a few people. But there was representation from the National Sports Council of Zambia (NSCZ), Zambia Professional Boxing Control Board (ZPBCB) and Ministry of Youth, Sport and Child Development. Former boxers Esther Phiri, Kennedy Kanyanta and Francis “Galagata” Zulu were also in attendance.
“I woke up to very sad news on January 21, 2021. I heard the call, heard the news but thought I was dreaming,” Kanyanta said. “I went back to sleep. I woke up and found so many messages telling me ‘Lopez is no more’. I closed my eyes and tears started rolling on CLICK TO READ MORE