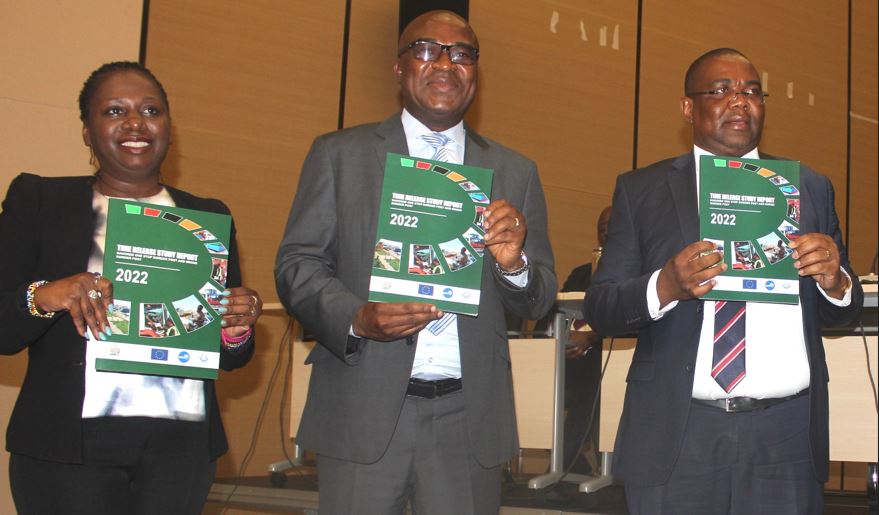 NANCY MWAPE, Lusaka
“IT’S our conviction that borders are not parking yards… seamless flow of traffic is what we aim for,” says Zambia Revenue Authority acting commissioner general Moses Shuko.
Mr Shuko believes if trade flows are restricted at borders, businesses are the first ones to feel the effects.
Like any sub-Saharan country, Zambia is faced with border challenges resulting in congestion, procedural delays, long transit times and high logistical costs.
To address some of the challenges at the borders, Zambia signed a €6.8 million sub-delegation agreement with the Common Market for Eastern and Southern Africa (COMESA) in November 2020 to implement the 11th European Development Fund (EDF) trade facilitation Zambia Border Post Upgrade Project (ZBPUP).

The ZBPUP is focused on addressing bottlenecks faced by both small and large traders by upgrading the Chirundu, Mwami and Nakonde one-stop border posts (OSBPs), which were identified as key to shaping Zambia’s trade profile.
Under the ZBPUP, measures being taken to improve trade facilitation include capacity building among border agencies, improving the legal framework and replacing obsolete soft infrastructure such as computers.
To this effect, Government launched the Time Release Study (TRS) for Nakonde and Mwami border, a critical tool to improving borders and customs-related procedures, deploy informed interventions and improve systems of information sharing while continuously striving to offer a service that is efficient and effective.
Highlighting key findings of the TRS report, ZRA senior collector Christopher Mwango said the common challenges facing Mwami and Nakonde borders include failure to adhere to the stipulated statutory working hours (24 hours) due to shortage of manpower and lack of orientation for newly-deployed officers.
Mr Mwango said with regard to time taken to process permits, licences and other trade supporting documentation, the study observed varying periods of time in the issuance by government agencies.
“Some government agencies issued trade supporting documentation within 24 hours of an application being lodged while some take as long as 10 days to provide required trade documentation,” he said.
Specific challenges further faced by Mwami border include lack of banking facilities and lack of cold chain-controlled environment for temporary storage of goods awaiting clearance.
Similarly, Nakonde border is faced with bad road conditions within the border area from the entry point to the checkpoint, which contributes to delays.
Commenting on the report, Mr Shuko said TRS signifies the seriousness ZRA attaches to improving trade facilitation by streamlining customs clearance procedures and reducing border dwelling time.
“The ultimate goal of ZRA is to positively contribute to the reduction of the cost of doing business by streamlining the border clearance procedures, to assure the just-in-time delivery of goods and bring the much-needed benefits to all parties in the trade supply chain,” he said.
And COMESA EDF programme manager Mshuka Kamwela notes that as a regional body, COMESA is interested in seeing that the bottlenecks identified in the TRS are addressed to improve efficiency at the border posts for the betterment of regional trade.
“We will need to assess performance along our major trade corridors, identify bottlenecks and their causes, and collectively work on a sustainable system to continuously address these challenges and improve the logistics performance on our trade corridors,” Ms Kamwela said.
With the implementation of the ZBPUP, Government has made milestones in addressing trade-related bottlenecks such as review of the Border Management and Trade Facilitation Act No. 12 of 2022 and consequential legislation, capacity-building training for border agencies, improving automation and connectivity of processes at borders, among others.
To address soft infrastructure, information and communications technology (ICT) and connectivity-related challenges at Chirundu, Mwami and Nakonde border posts, Government has committed about €4.4 million through ZBPUP out of the total budget of €6.8 million.
Despite this progress, COMESA assistant general Kipyego Cheluget feels that border crossing in the region is still full of challenges that add unnecessary costs to trade, resulting in an unfriendly business environment, costly, inefficient, and ineffective border controls.
Dr Cheluget said to address these shortcomings at border crossings along the major transport corridors, COMESA is supporting the implementation of principles of coordinated border management (CBM) at the border posts.
CBM is a model or a concept of achieving coordination in the management of border controls and operations within a border management agency, among border management agencies of a country and between/ among border agencies of neighbouring countries.
He explained that under ZBPUP, major focus is being given to ICT both in terms of provision of equipment and addressing issues of connectivity through technical soft infrastructure upgrades and enhancing intra-agency and inter-agency cooperation among border agencies.
Recently, Government handed over five servers and storage systems valued at US$547,106 to support the operations of the Asycuda World System and other ICT functions at ZRA.
Commending Government on the positive move, Dr Cheluget said the equipment bought will help address the issue of enhanced automation of processes and also build a foundation for further implementation of the Zambia Single Window System.
Further, COMESA is also supporting Malawi, Tanzania and Zimbabwe to implement similar border post upgrade projects and the expectations are that these coordinated interventions will reduce the clearance times at the borders and improve efficiency.
To reduce on the cost of doing business in the country, Ministry of Commerce, Trade and Industry Permanent Secretary John Mulongoti said Zambia’s reform agenda is meant to simplify, harmonise and standardise clearance processes to ensure quick clearance of imported and exported goods as well as those in transit.
Mr Mulongoti added that TRS has been undertaken to identify bottlenecks in the trade flow processes and appropriate steps have been taken to increase the efficacy and efficiency of border operations.
He explained that at Nakonde and Mwami TRS had brought about encouraging results regarding the clearance times, stating that for Nakonde, the average truck clearance period was found to be one day and 15 hours from the time of arrival to the time of departure from the common control zone, while for Mwami the average clearance time was two hours and 20 minutes.
The permanent secretary said ICT platforms have become an important tool for tracking the movement of goods in real time and are very cardinal in ensuring effectiveness in goods clearance processes.
Mr Mulongoti emphasised that the allocation of €4.4 million towards soft infrastructure and ICT will enable the country to have faster and efficient processing of administrative requirements as goods pass through customs.
It is worth noting that Zambia is among several COMESA member states that have made significant advances in trade facilitation issues, following the introduction of many modernisation measures, automation of processes, advances in systems connectivity and interfacing, use of risk management, implementation of National Single Windows and establishment of OSBPs over the past 15 years.