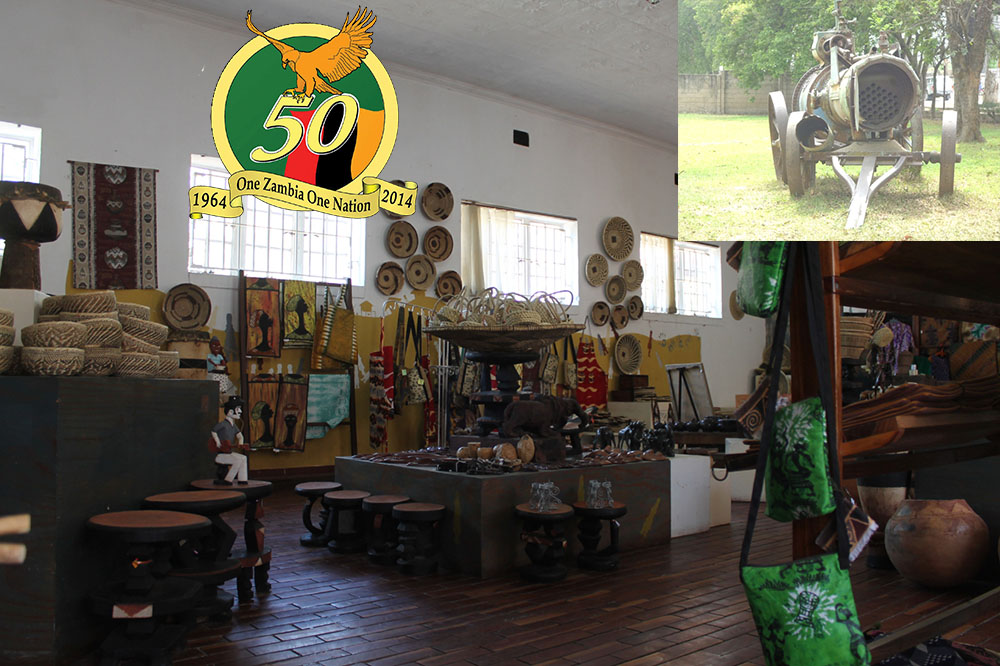 NKOLE NKOLE, Choma
IT HAS countlessly been stated that to know where we are headed, we must first appreciate where we are coming from. That being the case, every historic town deserves a place where its movable heritage can be preserved.
Considering its place as the bedrock of agriculture in Zambiaâ€™s southern region, the town of Choma has its own distinct history that is proudly displayed at the Choma Museum and Crafts Centre Trust.
Originally, the Choma Museum, which is located on Livingstone Road, was a learning institution called Beit Boarding School for Girls and built in 1927.
The museum was first established as a support project in Sinazongwe district by the Gossner Mission of Germany. This support ran for about 10 years after which it ceased to be a society project in Sinazongwe and was taken up by the Dutch government in 1987.
Choma Museum director Bevine Sangulube explains that the primary objective of the project started by the Dutch government was to help alleviate poverty in Sinazongwe district by empowering women in the area through their basket weaving activities.
â€œThe museum is actually a heritage institution which also focuses on economic empowerment,â€ Mrs Sangulube shares. â€œThe initial objective was to alleviate poverty especially among Sinazongwe women through craft making.â€
Eventually, after adoption by the Dutch government, the museum moved to its present location where it was restored by the National Monument Commission, now called the National Heritage and Conservation Commission (NHCC).
The Choma Museum is regarded as a regional institution that features the rich cultural history of Southern Province.
One of the most eye-catching features of the museum can be seen just as one is entering its premises. In the museumâ€™s gardens are displayed huge metal balls classified as bush clearing equipment.
These metal balls were used to erase or clear trees by connecting them with a battleship anchor chain and pulling them using huge caterpillars in preparation for the flooding of the Gwembe Valley basin following the 1957 to 1958 Kariba Dam construction.
Without doubt, a rich source of information on the history of the museum is cultural anthropologist, Bert Vitkamp, who is the museumâ€™s founding director.
â€œI came to Zambia in 1975 out of pure adventure and I worked for five years as an independent artist in Lusaka,â€ Mr Vitkamp explains. â€œI was director of the museum from 1988 to 1997.â€
Mr Vitkamp, who is originally from the Netherlands and now as good as Zambian, has integrated quite well in Choma and is in fact married to a Tonga woman.
He takes his time explaining how a steam tractor that dates back to the beginning of the last century found its way at the Choma Museum.
â€œIt was lying idly at Choma Secondary School because very often people do not realise valuable historical artefacts, so we asked the school to donate it to the museum so that other people could see it,â€ he says.
The significance of this historical remnant is the depiction that Zambia, like many other parts of the world, has moved forward with regard to agricultural mechanisation.
â€œOne of the functions of the Choma Museum and Crafts Centre Trust is to enhance cultural awareness and where possible to collect items, document and preserve them,â€ Mr Vitkamp highlights.
Mr Vitkamp admits that it is easy to set up an institution like the Choma Museum but the real challenge is to keep it going.
He acknowledges the fact that there is much cultural diversity in Zambia among the different ethnicities and says even more striking are all the changes that have been imposed on Zambia within 100 years.
Mr Vitkamp states: â€œPeopleâ€™s lives have changed with such fantastic speed and I think for young people, it is actually very difficult to imagine what Zambia was like maybe even 50 years ago.â€
He says this brings one back to the role of a museum as in his view, part of a museumâ€™s purpose is to recreate historical awareness and also help people reassess and revalue their cultural heritage.
The first generation of Zambians following independence, Mr Vitkamp notes, grew up often with very little respect and appreciation for their background because of being brainwashed by the colonial masters into thinking their cultures were primitive.
â€œThe positive sides of traditional life were underrated in general and a lot of people that belonged to the first generation of Zambian academics had a very ambivalent feeling about their own background,â€ he observes.
This is where the revaluing process by museums comes in to not only describe the complexities of various cultures, but their positive and negatives features also.
Mr Vitkamp states that much as there has been a spread of popular music and the popular culture from outside Zambia over the years, the rich tradition of traditional folk music should not be forsaken.
â€œThat is part of the same issue,â€ he points out. â€œThe things that you have from your past should not be undermined but should also be built on and continued into the future.â€