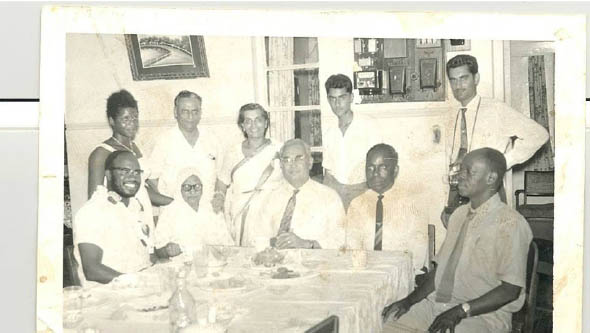 NKOLE NKOLE – Lusaka
MANY people are known for their role in accommodating African freedom fighters during the struggle for independence.Â  Some gave their time or money and others lent their expertise to the struggle.
One such person was Bhimsinh Jiwa Devalia also known as BJ Devalia who gave financial assistance to some of Zambiaâ€™s political leaders and freedom fighters.
Born in India in 1909, he landed in Mombasa, Kenya in 1925 at the age 16 and joined the trade union movement in Kenya which had marked the beginning of the Kenyan African National Union (KANU).
Mr Devalia first arrived in Zambia in 1935 and settled in Livingstone where he slowly became a successful businessman.
He was Chairman of the Northern Rhodesian Indian National Congress from 1940 until 1960. During this time, he â€œconnivedâ€ with the High Commissioner of India based in Nairobi to send some prominent Africans to study in India and get oriented into the Indian culture.
â€œIt was not common to see interracial friendships back then and there were many objections in the Indian community but my father was a different person,â€ Mr Devaliaâ€™s son Ravi shared in an interview.
The first Zambian to be sent on a pilot basis to India was then Northern Rhodesian African National Congress president, Godwin Mbikusita Lewanika.
Some of those Africans were also schooled in Gandhian principles of a non-violent struggle for independence as encouraged by the revered leader of the Indian independence movement from British rule, Mahatma Gandhi.
In 1986, Mr Devalia was honored by then Republican President, Kenneth Kaunda as a Grand Companion of Freedom for his contribution to Zambiaâ€™s fight for independence.
Notable among Zambian freedom fighters who became beneficiaries of Mr Devaliaâ€™s skillful assistance were leaders such as Simon Mwansa Kapwepwe, Nalumino Mundia, Arthur Wina, Sikota Wina, Daniel Lisulo and Mugoni Liso.
All these nationlists travelled to India under a programme arranged between Mr Devalia and then Indian High Commissioner based in Nairobi, Apasaheb Panth.
Many of Zambiaâ€™s leaders had lunch at Mr Devaliaâ€™s home on numerous occasions and some also stayed there. These included the Litunga Yeta III and Litunga Imwiko.
Though deceased since 1991, Mr Devaliaâ€™ son Ravi is keen to preserve his fathersâ€™ legacy. He shared during an interview how his father had raised eyebrows among some members of the Indian community because of his loyalty to Zambiaâ€™s political leaders.
Yet as sensitive as his commitment became, Mr Devalia believed as much in the cause for Zambiaâ€™s freedom as his Zambian colleagues did.
He carefully spearheaded the raising of funds from the Indian community towards Zambiaâ€™s struggle which was channeled to transport costs incurred by Zambiaâ€™s independence activists while in India.
Revolutionary pamphlets were secretly circulated in both rural and urban areas and in 1961, Mr Devaliaâ€™s businesses comprising a mineral water factory, bakery, laundry and restaurant collapsed.
The collapse happened following the withdrawal of an overdraft amounting to GBP 20,000 which was ordered by the British South Africa Company (BSAC) as the mother body of the Standard bank of South Africa.
The BSAC had grown aware of Mr Devaliaâ€™s support of African nationalists and were displeased by it.
When Mr Devalia passed away in January 1991, President Kaunda who was away in Iraq, sent the Devalia family a personal message of condolences.
â€œIt is with a deep sense of sorrow that I have learnt of the untimely death of Mr Bhimsinh Jima Devalia, GCOF, who passed away yesterday at the University Teaching Hospital in Lusaka. Mr Devalia will be remembered for the role he played during the liberation struggle for Zambiaâ€™s independence in that he identified himself with nationalists and mobilised the Indian community in Livingstone to rally behind UNIP to which he also rendered material support,â€ the special message reads in part.
A state funeral was held in honour of Mr Devalia and though President Kaunda was away, the entire UNIP central committee attended it.
The kind gesture marked final show of appreciation by President Kaunda for Mr Devaliaâ€™s uncompromising sacrifice.
Mr Davaliaâ€™s son, Ravi, has faithfully continued his fatherâ€™s business legacy through his chairing of the Devalia Group of Companies.
Having grown up in his fatherâ€™s shadow, Ravi Devalia is also supportive of Zambiaâ€™s economic and political progress and has kept in regular touch with some of his fatherâ€™s old Zambian colleagues who are still alive.