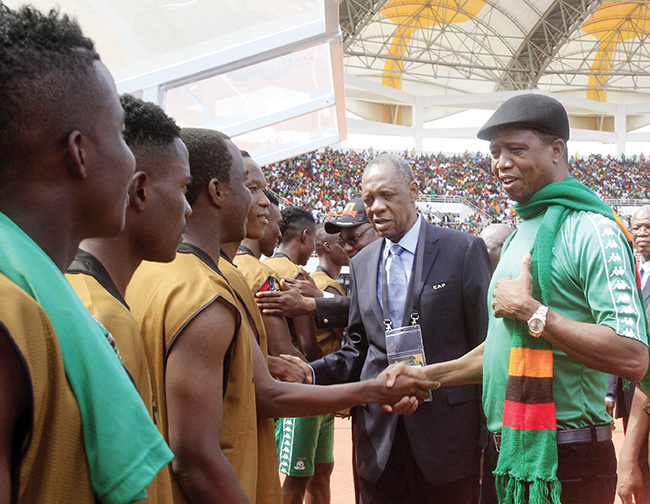 ROBINSON KUNDA, Lusaka
PRESIDENT Lungu has directed the Football Association of Zambia (FAZ) to bid for the hosting of the 2025 Africa Cup of Nations.
The directive comes in the wake of Zambiaâ€™s successful hosting of the just-ended Africa Under-20 Cup of Nations, which the junior Chipolopolo won.
Zambia edged Senegal 2-0 at National Heroes Stadium in Lusaka on Sunday night.
Lungu gave the directive in Lusaka yesterday when Confederation of African Football (CAF) president Issa Hayatou paid a courtesy call on him at State House.
â€œI donâ€™t know the bidding process but, as a politician, I am bidding right now. I am bidding on behalf of all Zambians. We can improve on the hotels, roads and transport,â€ he said.
Lungu said Zambians love football because it unifies them.
â€œFootball unifies us. I doubt anyone in the opposition will oppose my bidding for Zambia to host the Africa Cup. In football, if you lose, you are still united; if you win, you are still united but itâ€™s different in politics. Thatâ€™s why football is beautiful,â€ he said.
Lungu is happy with the way Zambia hosted the Africa Under-20 Cup of Nations and thanked CAF for giving the country the opportunity.
â€œI have received a call from someone saying today [yesterday] was Youth Day now we need another holiday to celebrate the winning of the tournament. Thatâ€™sÂ  how much we love football but I am saying yesterday we played, tomorrow [today] we should work,â€ he said.
And Hayatou said CAF is happy with the way Zambia organised the youth tournament and will consider giving the country the rights to host 2025 Africa Cup of Nations.
â€œWe were surprised with the way the tournament was organised. In fact it was beyond our expectation. I am speaking in the presence of my CAF executive members definitely if FAZ bid, we will consider Zambia.
â€œWe have already given the rights to host the tournaments up to 2023 to other countries but if any of them fails, we will directly give to Zambia because they have the capacity,â€ Hayatou said.
Minister of Youth, Sport and Child Development Moses Mawere said the support from President Lungu is encouraging.
â€œI think itâ€™s a challenge that the President has thrown to us and I think we are equal to the task. As a ministry, we are excited that we are receiving support from the President. I think we are equal to the task and FAZ should start the process formally,â€ Mawere said.
FAZ president Andrew Kamanga said the association will soon start the process of bidding for the tournament.
â€œThe requirement is that you have to host a junior tournament before going for the main tournament. After we hosted the under -20 tournament, now we qualify and we are going to bid for the 2025 edition,â€ Kamanga said.
He said Zambia is alert and will jump on the opportunity to host the continental tournament before 2025 if any of the countries fail.