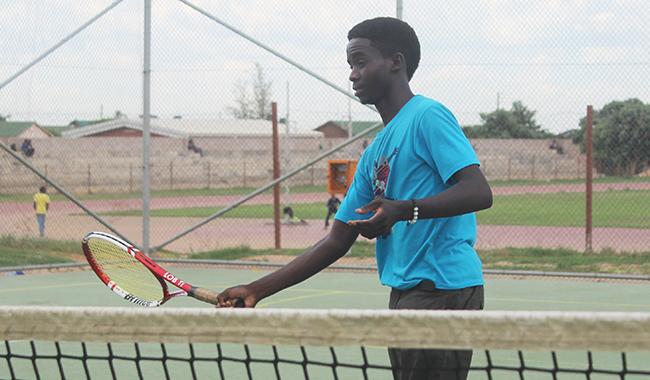 RISING STARS with DIANA MUTAKAFIMBO
THE Zambia Tennis Association (ZTA)â€™s failure to meet its obligations with international tennis bodies has adversely affected the development of the sport.
While local competitions are being held, the ZTA should ensure financial obligations with both the International Tennis Federation and Confederation of African Tennis are honoured.
Zambiaâ€™s participation at international events is dependent on being in â€˜good booksâ€™ with the two organisations.
ZTA has continued to organise local tournaments with the latest being the Christmas Invitational Championship that was held at Kabulonga Girls Secondary School in Lusaka.
Despite the hindrance faced in participating at international championships, players have kept their hopes alive hoping the situation will soon be dealt with.
â€œI want to play tennis at a high level and I know that I will make it one day,â€ says 17-year-old Bernard Phiri.
BACKGOUND
Born on August 4, 1998, Bernard is the first born in a family of four.
He lives with his parents in Northgate Gardens area in Lusaka.
Bernard completed education at Lusakaâ€™s Chipata Secondary School in 2014 and wants to study electrical engineering.
While waiting to enrol for tertiary education next year, Bernard is focused on playing tennis.
â€œI have dedicated this time to improve my tennis skill. I want to concentrate on tennis before I get into college. I think this is the best time for me to totally concentrate on tennis because I donâ€™t have to think about school,â€ he says.
Playing tennis had never affected Bernardâ€™s performance in school. He believes his involvement in the sport inspired him to remain focused both in class and on the court.
CAREER
Bernard started playing tennis in 2011 with the Kazembe Tennis Academy.
He has won several medals in different national competitions.
His first major medal was in 2012 during a national event at Olympic Youth Development Centre in Lusaka.
Bernard participated in various local tournaments and managed to put up a decent performance.
â€œI am working hard for a slot in the national team. I want to be part of the national team and I know there is a lot of competition at that level thatâ€™s why I am working extra hard to ensure I get a slot in the national team,â€ he says.
He has ambitions of playing professional tennis in the United States of America.
â€œI first have to make sure I am worth a player to compete at international level. My dream is to play tennis in USA and I know I will achieve that one day,â€ he says.
IDOL
Zambiaâ€™s tennis ace Edgar Kazembe is Bernardâ€™s role model.
Kazembe is Bernardâ€™s coach and founder of Kazembe Tennis Academy.
â€œHe inspires me a lot not just as my coach but as a player too. He has
achieved a lot in the game,â€ he says.Kazembe is Zambiaâ€™s top seed.For comments: dmutakafimbo@daily-mail.co.zm