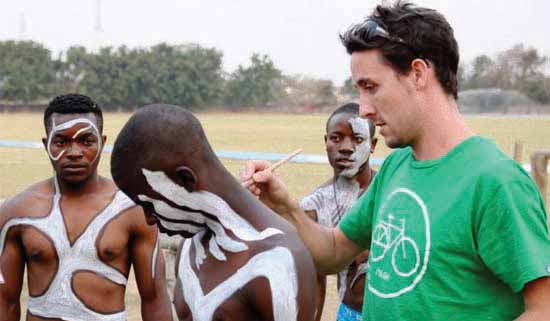 KELVIN KACHINGWE, Lusaka
IT was founded by former street children.
In August last year, Barefeet Theatre performed a Zambian adaptation of Oliver, a musical based upon Charles Dickens novel Oliver Twist. And in December, the members performed a Zambian interpretation of The Never Ending Story, based on a German fantasy novel by Michael Ende and the English translation by Ralph Manheim.
Mid-last year, they toured the United States (US), Ireland and the United Kingdom with a show called Float, a wild, wicked, wonderful water adventure with, as a main character, the mystical Zambia god of water, the Nyami Nyami.
Barefeet uses play, creativity and empowerment to give vulnerable children in Zambia a chance at a better life.
Established in 2006, it was some form of response to the plight of young people living on the streets. Through the power of performance, educational workshops and more, they develop vulnerable youths into physically healthy, cognitively and socially competent young people.
In their own words: â€œBarefeet is about people. Itâ€™s about children. Itâ€™s about art. Itâ€™s about change, about fun, about achieving transformation through mischief, hard work, but always with laughter and a smile.
â€œItâ€™s about information and education. Itâ€™s about hope, aspiration and reaching for more. Itâ€™s about innovation and collaboration. Itâ€™s about the staff, volunteers and supporters who have been part of our birth, growth and evolution. Itâ€™s about walking together to create a movement that can help shift the world.â€
Put differently, they deliver life-saving information and inspiration to the kids who need it most through their outreach programmes with children living on the streets, their interactive theatre workshops with 2,000 children in 40 communities in Zambia, and on the national stage at the annual Barefeet Youth Arts Festival.
However, their stage performances, through their performance company, remain a bigger attraction.
The performance company prides itself in creating a storm at any event through energy, passion, magic and innovation.
An ensemble of some of the most talented artists in the country, the performance company has performed for dignitaries such as former US President Bill Clinton, Anne The Princess Royal, Earl of Wessex Prince Edward, former US President George W. Bushâ€™s wife Laura, United Nations Secretary General Ban Ki Moon and four of Zambiaâ€™s six Presidents.
They have also performed throughout Europe at the Contacting the World International Theatre Festival Tour, at Grahamstown Arts Festival in South Africa and at Harare International Festival of ArtsÂ  in Zimbabwe.
The company specialises in a variety of different art forms such as traditional dance, contemporary dance, circus, puppetry, fire eating, stilt walking, popular theatre, music, drumming, song, acrobatics and storytelling. Or a spectacle comprising of all the elements.
Artistic director Adam McGuigan, himself an actor, director, writer and film maker of Irish descent but based in Zambia, has been reflecting on the existence of Barefeet the last 10 years.
He says when they started about a decade ago, Barefeet Theatre members were all young idealistic artistes with grand designs to change â€˜the worldâ€™. Right from the beginning, they could see the potential of connecting through art.
â€œI think it helped that most of the founding members were once on the streets themselves and had found art as a way of providing a corridor out. I think that art connects to human beings in many ways, but music, drama, rhythm and visuals speak to the soul.
â€œChildren are naturally energetic and curious individuals and unless you stimulate them into positive pathways, their energy can get misguided and misinterpreted,â€ McGuigan says.
â€œArt lifts the spirit and I think when you are in what appears to be a â€˜hopelessâ€™ situation, art can be a way of pulling you back from the brink. Bringing people back into a place where they feel connected to other humans, a sense of belonging, connection and empowerment. There is real power when a young person takes to the stage for the first time, thatâ€™s where we got our name.
â€œHaving shoes meant dignity and most of the children on the streets didnâ€™t have shoes. Yet whilst we danced and sang, performed and rehearsed, we did so on our bare feet. We loved the mixture of strength and vulnerability in the name, and after much discussion, we became â€˜Barefeetâ€™.â€
But even with that, the children are treated with a professional approach when preparing a performance.
Still, children are allowed to be children.
â€œI feel that the kids we work with on the streets are forced into some form of â€˜adulthoodâ€™, at such an early age. Being in survival mode where fighting for your next meal is your priority; where you stay, how you manage your money, your health, your safety, navigating sexual advances, navigating the authorities whilst also dealing with the usual adolescent challenges.
â€œI find that when our children participate in Barefeet activities, it is an opportunity for them to play, even in our most intense and challenging programmes, there is a huge emphasis on play. Again, I relate back to authenticity and truth. I believe that all humans enjoy an aspect of play in their lives, especially children.
â€œIf we can facilitate children being given the opportunity to be children, even for a short period, and combine this with options for making positive life choices guided by trusted facilitators who have a shared history with the children, then I believe we can have a big impact. Itâ€™s fun to play and therapeutic to laugh, it reminds us that we are human and we are connected.â€
That is what Barefeet is all about.

Roadblocks are fine for maintenance