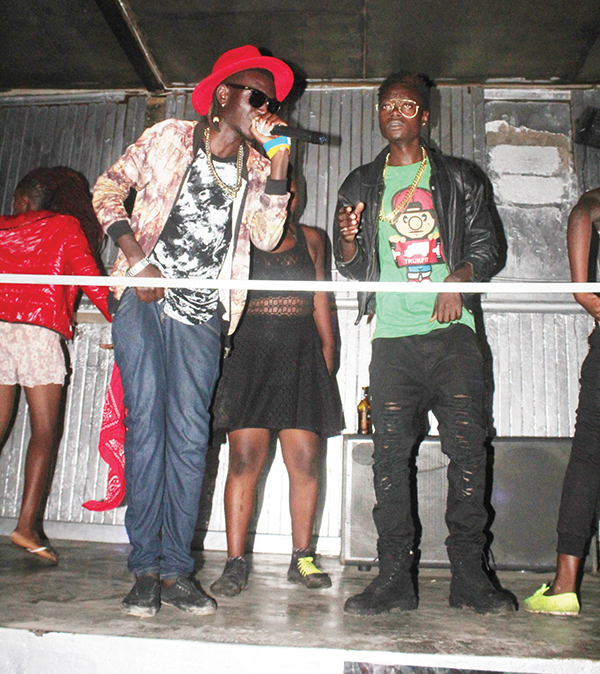 STAFRANCE ZULU, Ndola
REVELLERS at Turn Up Night Club in Ndolaâ€™s Lubuto West Township were last Saturday treated to spectacular performance by Dope Boys Bapele, a local up-and-coming outfit that is currently making waves in the friendly city.
A sizeable audience had turned up at the night club to watch the outfit that has been performing in Kitwe and Ndola regularly, and they were not disappointed with what was offered to them.
As was expected, they performed their Ka dance and Wadada songs much to the amusement of the show goers in the sprawling Lubuto west township. Some revellers, mostly the females, seemed to have been so charmed by the energised dancing skills of the duo that they were tempted to join them.
And they joined-in, having failed to resist the temptation.
Other songs they played were; Bapele, Juce Kwataye, Jane Napapa and Six Inches which were all well-received by the crowd.
But the Dope Boys were not alone; they were joined by another group calling itself Ama Tackle Ya Ndola.
There is meaning behind the name; they have come to â€˜tackleâ€™ (or upstage) the existing order in the music business.
Letâ€™s see how far they go!
At Turn Up, the group performed its supporting role well.
Their song Congo Dance was a crowd puller among members of the audience who took to the dance floor. So good was the song that the show goers seemed to want to dance to the song longer than its duration.
But before that, a number of emerging artistes from Ndola and Kitwe took advantage of the show to advertise themselves. Those that performed include Slim Lover of Kitwe, JYC and Cash Kid both of Ndola.