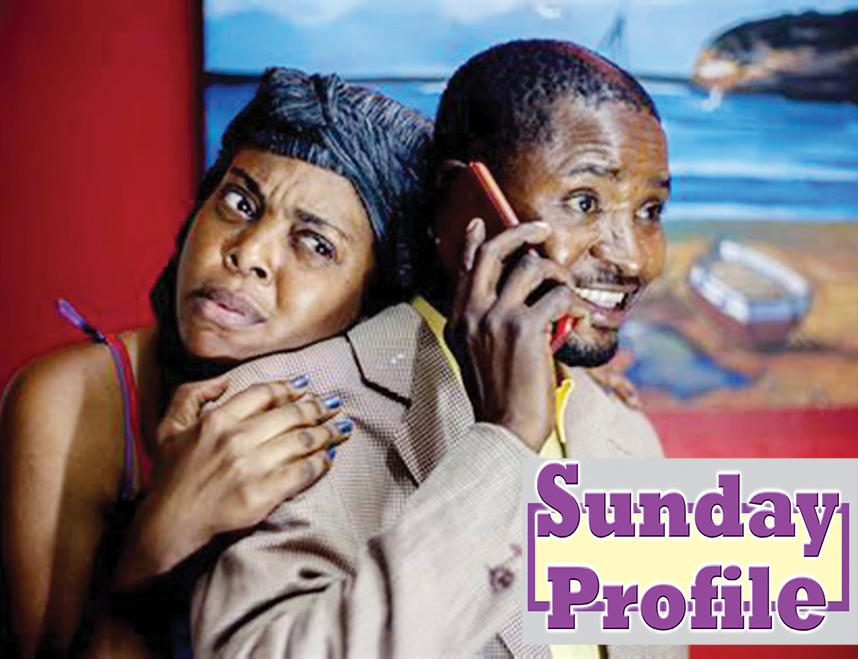 Sunday Profile:
YANDE SYAMPEYO, Lusaka
WHILE in Grade Seven at Mahatma Gandhi Primary School, Aubrey Luo made a decision to secretly follow his passion, comedy.
This was after he realised his parents would not in a ‘hundred years’ entertain the thought of him joining the drama group to pursue his dream.
When Aubrey was enrolled at Kabulonga Boys secondary school, he paired with classmates by the likes of the late Augustine Lungu, Saint Michael and late Daddy Zemas, and every day after class, they trekked to the Lusaka Play House with a mission to pursue their talent.
“I identified my talent for comedy in grade seven and I decided to join the YMCA drama group. When I went to Kabulonga boys, I met the late Augustine Lungu who was my best friend. He made me who I am today.
“As for my parents, all they knew was that I was leaving home for school, but little did they know that after class, Augustine and I would walk all the way to the Play House,” he recollects.
After completing secondary education, Aubrey frequented the Play House to sharpen his talent further.
The seventh born in a family of nine, Aubrey’s passion for comedy was nurtured with the help of a seasoned comedian, Bob Nkosha.
“Bob first gave me a wedding ceremony to ‘manage’ and I handled it so well and there on, I knew comedy was my ‘thing’. Bob became my mentor,” he says.
Today, Aubrey has 14 years’ experience in the industry with a massive fan base.
Aubrey, commonly known as Shimumbi, is a notorious character who is married to Banamumbi performed by Rita Sikota.
“When I post our acts on social media, within an hour, it attracts over 4,000 views, that is massive,” he says.
Although Aubrey’s wife of 15 years, Angela, is not always ‘laughing’ to his act as Shimumbi, the brand has earned him employment at the Zambia National Service (ZNS) as a stores clerk and actor in the theatre group (ZANASE).
Aubrey’s chance at ZNS came through when he was performing at a function and his prowess caught the attention of a ZNS official who was the guest of honour.
“The ZNS official likened my acts to that of the late famous comedian Maximo, and so he asked me to consider joining the service to which I gladly accepted,” Aubrey recollects.
He has been working for ZNS for four years now and expresses gratitude to the Commandant Nathan Mulenga for supporting the development of theatre arts and sport.
As luck would have it, the brand Shimumbi has also caught the eye of Zambezi Magic, DStv channel which is tailor-made for the southern African viewers and includes an urban variety of entertainment.
Aubrey is currently in talks with Zambezi Magic for a possible contract to produce a series of Shimumbi.
“Although I have posted on social media a number of acts by Shimumbi, it has not made us that much money, but I am glad that Zambezi Magic has identified us and we will be signing a contract with them soon,” Aubrey says.
He says the Shimumbi show, which will feature Rita and a few other acts promises to be a series to look out for.
“The recent act I did with Rita on the ‘gym’, my wife was not so pleased with it, but I advised her to understand the nature of my work,” he exclaims.
Aubrey says comedy is a lucrative business which unfortunately is not fully exploited and supported by many Zambians.
He says Zambian comedians have the potential to thrive only when they are fully embraced and supported especially by corporate organisations.
Aubrey further cites bickering among comedians as another factor affecting the growth of the industry.
“In other countries, you can sustain your livelihood solely through comedy but in this country, it is quite a challenge.
“You will find local companies failing to support local artistes, but if a foreign comedian comes to perform here, they (companies) will go to any length to support their acts. This is a similar problem facing local musicians. Some members of the public simply lack the appreciation of local talent,” Aubrey says.
He, however, advises comedians to be competitive by carrying out research to produce quality works.
Aubrey does not only consider comedy as a talent but a business venture for which one can sustain their livelihood.
“I consider comedy as my livelihood because out of it, I bought a small holding in Chongwe and built a house on it,” Aubrey says.
He advises corporate organisations to emulate the defence wings such as ZNS, Zambia Army and Zambia Police Service who have a deliberate policy to identify and support local talent.
Aubrey advises youths with a passion for comedy to visit the Lusaka Play House to acquaint themselves with the operations of the industry.
Inspired by the likes of Nicolas Kawanga, Aubrey, a Seventh Day Adventist (SDA), possesses an advanced certificate in data processing.
Aubrey worked for Hybrid poultry farm as a data entry clerk and he moved to Mulungushi Village Complex as an accounts clerk and later Shoprite stores in the same capacity.
Born in 1969, Aubrey was brought up in Lusaka’s Mtendere township, where, as a teenager, he did all sorts of ‘silly’ things.
“I recall my friends and I would cross over to Kabulonga area and occasionally, we would grab bicycles from the mayadi (rich kids) whenever we came across them,” he recollects.
Aubrey appreciates his spouse for always reminding him about the importance of remaining faithful to their union in the wake of HIV/AIDS pandemic.
“I treat all my fans, both male and female with utmost respect. So when my wife tries to act all jealous whenever female fans accord me a lot of attention, I remind her that she is the only one I love,” he says.