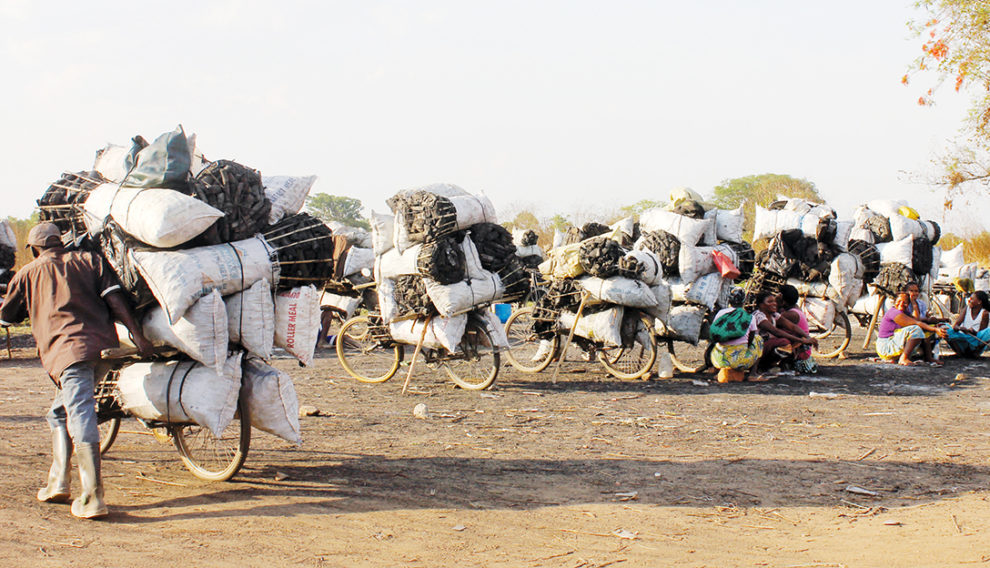 NKOMBO KACHEMBA, Kitwe
IT IS common to see a convoy of bicycles with bags of charcoal neatly stack on carriers, descending steep slopes on the

banks of the Kafue River in the mining town of Kitwe.
It is an expedition which the charcoal burners have to embark on to get to the market from the forests where they burn charcoal.
The charcoal burners have to first pass through the check-point at Bulangililo waterworks, where they have to pay charcoal levy before proceeding to the market.
At least 20 charcoal burners cross through the Bulangililo checkpoint within a space of 30 minutes to have their bags of charcoal cleared.
The indiscriminate cutting down of trees for charcoal production is common in the forests of Kitwe, raising fears of depleting forests.
Trees are important because they provide a sanctuary to different animal species and also absorb carbon dioxide from the atmosphere, a process which reduces global warming.
Most of Kitwe’s forests have been encroached upon by settlers, who are cutting down trees for charcoal production.
The settlers are also felling trees to create room for housing development and economic activities such as farming. This has resulted in the forests in the mining town being depleted and subsequently biodiversity being threatened by the altered ecosystems.
Kitwe has four national forests; Mwekera, Ichimpe, Karibu and Misaka which have settlers that are clearing the trees for charcoal burning, farming and other economic activities.
According to the Forestry Department, an estimated 39,520 people are currently living in the national forests in Kitwe.
Various stakeholders, including the charcoal burners, have expressed concern at the fast rate at which national forests in Kitwe are being depleted.
Reuben Mulombwa, 46, a charcoal burner of Chatete settlement across the Kafue River believes charcoal burning is a lucrative business, but is worried at the rate at which the forests are being harvested in Kitwe.
Mr Mulombwa said some charcoal traders do not know how to cut trees as they actually uproot the plants.
He said experienced charcoal burners are supposed to cut the trees from the stems to allow them to grow again.
“The problem that we have is that most of us pull out the trees from the roots instead of cutting them from the stems. If we continue harvesting the trees by uprooting them, 10 years from now, we will have no trees to talk about here in Kitwe,” he said.
Mr Mulombwa cited the Mutondo, Umuputu and the Nsangali species as some of the trees that have become rare due to charcoal burning.
“We had trees that we used to cut for charcoal burning and they used to give us high-grade charcoal, but they are no longer there,” explains Mr Mulombwa while stacking bags of charcoal on his bicycle.
Another charcoal burner, Humphrey Kunda, 35, also narrates that trees that used to give them high-grade charcoal have been depleted.
Mr Kunda said the remaining trees can only produce charcoal that burns out quickly.
He said the Forestry Department needs to do serious sensitisation to charcoal burners on methods of sustainable harvesting of forests.
“A long time ago, I used to produce more than 40 bags of charcoal per month but now I can only manage 10 bags. The reason is that the trees that used to give us good grade charcoal are finished,” he said.
Meanwhile, Milika Mpandawire of Kakolo settlement said charcoal burners need to develop a culture of planting trees to replace what they are harvesting.
“The problem is that we only know how to cut down trees. We must also learn how to plant trees,” Ms Mpandawire said.
And Forestry Department acting district forest officer John Yowela expressed concern over the indiscriminate cutting down of trees for charcoal production.
Mr Yowela attributed the practice to the increasing number of people that have settled in the forests.
“In the 1990s, we saw a number of companies being privatised and this led to job losses. That was the period when we also saw a number of people coming to settle in our forests,” he said.
Mr Yowela said some settlers have built houses in the national forests and attempts to relocate them have failed.
Misaka forest has 30,000 settlers; Mwekera, 8,000, Karibu 20 and 1,500 people are currently living in Ichimpe forest.
Mr Yowela said the Forestry Department has inadequate forest officers and faces transport challenges to effectively monitor activities in the forests.
He called on Government institutions to help the department to discourage people from settling in the national forests.
Mr Yowela said some of the institutions have contributed to encouraging people to stay in forests by providing them with such services as education, health and electricity.
“Recently, we had to halt the construction of a health centre by the Ministry of Health in one of the national forests in Kitwe. The Ministry of Education has also built a school in Misaka forest,” he said.
Mr Yowela noted that the Kitwe City Council has been collecting charcoal levy from charcoal burners, while the Ministry of Agriculture has been distributing farm inputs under the Farmer Input Support Programme to people that have encroached on forestry reserves.
And in its efforts to relocate the people that have settled in Mwekera forest, which is about 17,887 hectares in size, Government has de-gazetted 6,348 hectares, where 8,000 people will be relocated.
To curb deforestation and protect biodiversity, Government enacted the Forest Act No 4 of 2015 in an attempt to manage forests countrywide with the full participation of community members.
Under the Act, Community Management Committees will be established to curb the illegal cutting down of trees in the forests.
In addition, the Forestry Department is expected to train people living near the forests in bee-keeping to dissuade them from charcoal burning.
Apart from that, Mr Yowela said the department, with support from the Copperbelt Energy Corporation, has cultivated 280,000 trees in its nursery to be transplanted in the national forests.
Further, Government intends to begin training forest guards at the Zambia Forestry College in Kitwe and deploy them to national forests around the country. If implemented as planned, perhaps these measures could de-escalate deforestation in Zambia and protect biodiversity.