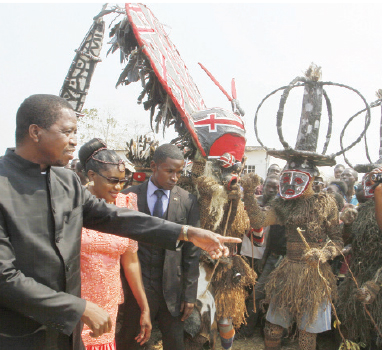 ART YAK with CHANDA MWENYA
WHILE there was something for everybody to celebrate about in President Lunguâ€™s maiden speech to Parliament last Friday, no one could have been happier than Zambians in the creative industry about the formation of the National Arts, Cultural and Heritage Commission.
After the establishment of the Ministry of Tourism and Arts, I see President Lunguâ€™s announcement about the creation of the National Arts, Cultural and Heritage Commission as governmentâ€™s final wake-up call to revamp the creative industry.
The President reiterated that culture and heritage are a national asset and a cornerstone for the countryâ€™s identity.
He acknowledged that the arts and cultural sector, which has been sidelined, has economic development potential and can contribute to job creation and career market if properly managed.
Indeed, with a right policy framework and talented minds in place, the creative industry can be an economically viable sector that can reasonably contribute to the nationâ€™s Gross Domestic Product.
The creative industry rides on the creation, marketing and distribution of products and services resulting from human creativity.
The creative industry engrosses the interplay of knowledge-based activities that include but not limited toÂ  music, performing arts,Â  motion picture, newspaper, computer software, photography, commercial art, advertising, visual art, dance, craft, fashionÂ  and poetry.
Zambiaâ€™s broad ethnic diversity offers a great reservoir for tapping cultural and intellectual products that can be packaged for local and international consumers and bring economic benefit.
The United Nations Conference on Trade and Development (UNCTAD) indicates in â€œStrengthening the Creative Industries for Development in Zambiaâ€ report that the organisational structure for the administration of cultural policy and its impact on creative sectors appears to be fragmented, making it difficult for government to design concrete strategic plans for the short and long term.
The UNCTAD report also shows that in Zambia, like in many developing countries, the performance and competitiveness of the creative industry have suffered from weak institutional and political support, low levels of entrepreneurial capacity, over dependence on foreign films and massive copyright infringement.
On the other hand, Nigeria is exhibiting a vibrant creative industry on the continent. The World Bankâ€™s â€œAchieving the Promise of African Cultural Exportâ€ report cites the film industry as the second largest employer after agriculture in that country.
However, the report bemoans that Africaâ€™s share in the global trade of creative products remains marginal despite its abundance of creative talent.
The situation is largely attributed to unstructured and loosely regulated and high level of piracy, inadequacy of formal distribution for both domestic and international consumers.
Back home, the formation of the National Arts, Cultural and Heritage Commission will immensely assist in streamlining and developing the creative industry in the country.
Most importantly, visual artists, musicians, performing artists and all stakeholders in the creative industry should rise to the occasion and benefit from the support and special recognition of creative arts by the government.
artyak@rocketmail.com