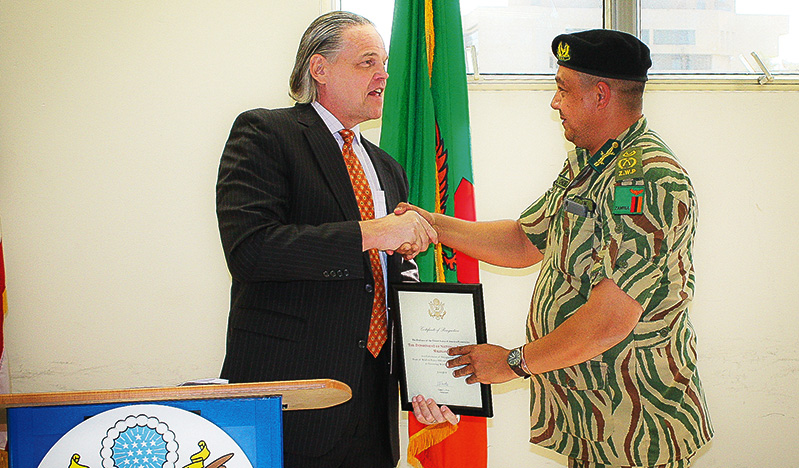 FRANCIS LUNGU, Lusaka
SENSITISATION of the local people has been identified as one of the major elements needed in natural resource conservation in Zambia.It is envisaged that once the indigenous people appreciate the importance of conserving the godly-endowed natural resources that Zambia boasts of, more benefits would accrue in enhancing the tourism sector’s growth.
Wildlife is one of the country’s major natural resources. It is vital in attracting both local and foreign tourists. Alas! Most animals have been endangered to poaching over the years.
Zambia has 20 national parks, 36 game management reserve areas and two wildlife sanctuaries accounting for 31.4 percent of the country’s total land surface of 752,618 square kilometres.
From these national parks, statistics from the Department of National Parks and Wildlife (DNPW), formerly the Zambia Wildlife Authority (ZAWA), indicate that prior to 1960, the country had about 250,000 elephants and 60,000 black rhino population, the largest on the continent, but that sadly, today Zambia has only around 21,000 elephants and less than 50 black rhinos.
This huge extinction of the valuable animal species is mainly attributed to poaching and lack of sensitisation among the locals in areas that are endowed with a variety of animals.
Poaching, either for consumption or commercial purposes, has been a thorn in the neck of the DNPW for a long time now.
Natives in these animal domiciled territories have not seen the value of preserving the animals and do not even see anything wrong in killing them for consumption or sale.
“We do not feel the loss or [the impact of] reduction in the number of elephants from over 200,000 to whatever number because most of the people have not even seen these animals, but just eat them as game meat when they buy,” said one of the youths during the United States of America (USA) Lusaka Embassy organised Anti-Poaching Campaign closing meeting in Lusaka recently.
Another youth, who grew up in one of the game management reserve areas in Western Province, felt there was nothing wrong in eating bushmeat as he was growing up because it was a tradition and people felt privileged to have different kinds of animals for food.
The sentiments of the youths validate the need to sensitise community members on the importance of preserving natural resources.
The US government, through the embassy in Lusaka, provides over US$8million annually for natural resource conservation activities in Zambia.
This year, part of this financial support went to the anti-poaching campaign dubbed “YALI for wildlife”, which ran from May 18 to June 6.
The campaign to raise awareness of the problem of illegal poaching mobilised over 15, 000 members of the YALI Networks to help spread the message to encourage people not to purchase illegally acquired bush-meat or wildlife products.
The campaign period also involved the Wildlife and Environmental Conservation Society of Zambia, and other environmentally conscious activists, community scouts, and wildlife police officers were equally supported.
“As an example of our assistance, we provided training for more than 70 park rangers, DNPW prosecutors, and staff to help fulfil DNPW’s mandate,” said American Ambassador to Zambia Daniel Foote at the closing ceremony of the Anti-Poaching Campaign. “Through USAID and the U.S. Fish and Wildlife Service, we funded two canine units, complete with dogs, handlers, and vehicles to help rangers in their anti-poaching work.”
Mr Foote said the US government has assisted Zambia to place over 700,000 hectares of wildlife habitat under protection which include Kafue, North Luangwa, South Luangwa, and Lower Zambezi national parks.
“Our dedication to wildlife conservation is unwavering, and we will continue to work with various stakeholders to keep Zambia’s iconic species alive, protect their habitat, and improve the livelihoods of Zambians through wildlife conservation activities,” he said.
The American envoy said preserving Zambia’s wildlife would increase the influx of foreign tourists, and that currently nearly 40,000 tourists from the USA visit Zambia each US principally to experience the country’s wildlife up close.
“Protecting Zambia’s wildlife is critical for the growth of Zambia’s economy. Ecotourism has the potential to significantly improve the lives of Zambians by creating jobs that could help lift many Zambians out of poverty, but if this country is to realise such growth, important steps must be taken to stop illegal poaching now,” he said.
Foreign tourists coming into the country hit 1.1 million last year and the Ministry of Tourism and Arts has targeted to reach the all-time high mark of 1.3 million tourists this year.
USAID Zambia natural resources management specialist Jassiel M’soka earlier indicated that poaching and the illegal trade in wildlife and wildlife products are two of the largest black markets in the world, amounting to billions of dollars a year.
Mr M’soka said wildlife trafficking not only threatens the survival of iconic species but economic and tourism development, environmental health, and security across nations.
“To address these issues, USAID Zambia is currently working with a number of implementing partners to combat wildlife crime and promote wildlife conservation at both national and trans-boundary levels,” Mr M’soka said
DNPW assistant director of conservation and management, Andrew Chomba said the major challenges facing his organisation is poaching, coupled with inadequate staff for game patrols and lack of access to new technology.
“You cannot talk about tourism without protecting the natural resources…our major threat is poaching. In the 1970s Zambia had 60,000 rhinos but they were declared extinct in 1994 when the last rhino was shot,” he said.
Other social and economic activities such as land encroachments and commercial agriculture, timber cutting or deforestation and even mining, are some of the factors threatening wildlife, Mr Chomba said.
“Poor infrastructure is another challenge. There are no good health facilities and houses for our staff in rural areas. Some areas are not easily accessible and patrolling on foot is not easy, neither is it safe,” he said.