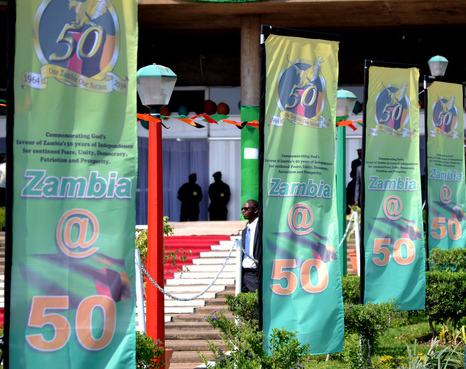 NKOMBO KACHEMBA, Kitwe
AN Anglican priest has advised Zambians against shunning this yearâ€™s independence celebrations because the occasion is biblical and ordained by God.
Father Berry Muchemwa of Kitwe said it would be wrong for citizens to shun the countryâ€™s golden jubilee celebrations as it is supposed to promote oneness.
â€œIn Leviticus 25, the Bible talks about jubilee celebrations as festivities that are sanctioned by God. Just like biblical teachings, in the year of Jubilee, people are supposed to forgive each other and show love to one another,â€ he said.
Fr Muchemwa was speaking in Kitwe on Sunday during an inter-denomination prayer service held at the United Church of Zambia St. Margaretâ€™s Church.
He said it is important for Zambians to realise that the 50 years of peace they have continued to enjoy is because of Godâ€™s favour.
He said it is important for citizens to turn up in numbers to celebrate independence day.
Fr Muchemwa said Zambia is among the few countries in Africa that have never experienced war or any serious tensions because of Godâ€™s interventions on issues of national interest.
He also said many African countries have benefited from Zambiaâ€™s peace by seeking refuge in the country.
And Kitwe district commissioner Elias Kamanga said the district administrative office has lined up a number of activities to commemorate the golden jubilee.
Mr Kamanga condemned people planning to boycott this yearâ€™s independence day celebrations.
He said jubilee is not a political decree but a festivity which is biblical and blessed by God.