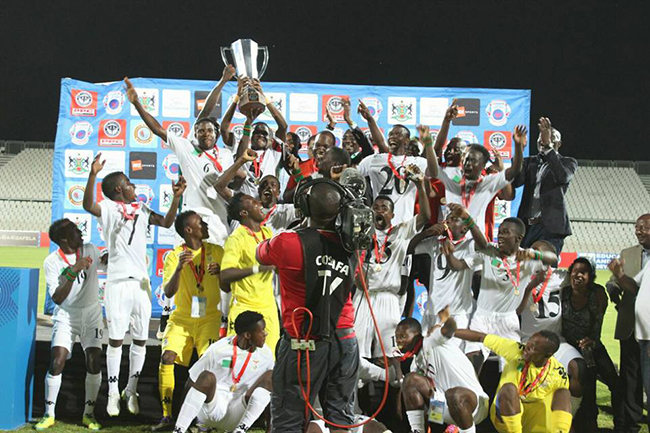 ROBINSON KUNDA, Lusaka
SOUTH Africa coach Thabo Senong is excited to renew his rivalry with Zambia when the teams clash in a friendly next month at Levy Mwanawasa Stadium in Ndola.
The match will be played two months after Zambia beat South Africa 2-1 to lift the Council of Southern Africa Football Associations (COSAFA) Youth Championship title in Nelspruit.
The win in South Africa gave the junior Chipolopolo a record 11th COSAFA Youth Championship crown.
Senong told South African Football Association (SAFA) website that he cannot wait to face Zambia.
He said Zambia could give the Amajita a good preparatory match ahead of the Africa Youth Championship that will be staged in Lusaka and Ndola.
Zambia are in a tough Group A alongside Egypt, Guinea and Mali while South Africa are placed in Group B with Cameroon, Senegal and Sudan.
The top four finishers will qualify for the 2017 South Korea FIFA World Youth Championship slated for May.
Senong added that the Amajita will use the match to acclimatise.
â€œWe intend to have a few international friendly matches before we begin the tournament, and we are glad to have secured our first international friendly against Zambia.
â€œWe will be using this friendly to build on the momentum of the last year, but mainly to adapt to the climate of Ndola,â€ Senong told Safa.net.
And FAZ deputy general secretary Lombe Mbalashi said in an interview in Lusaka yesterday that the friendly initially set for February 8 has been moved forward because Zambia will be in Spain for a two-week training camp.
Mbalashi said South Africa will give the junior Chipolopolo a good preparatory match ahead of the continental showpiece.
The Beston Chambeshi-mentored side will also face Real Madrid, Atletico Madrid and Barcelona youth teams in friendly matches while in Spain.

Learn the art of swimming – ZASU