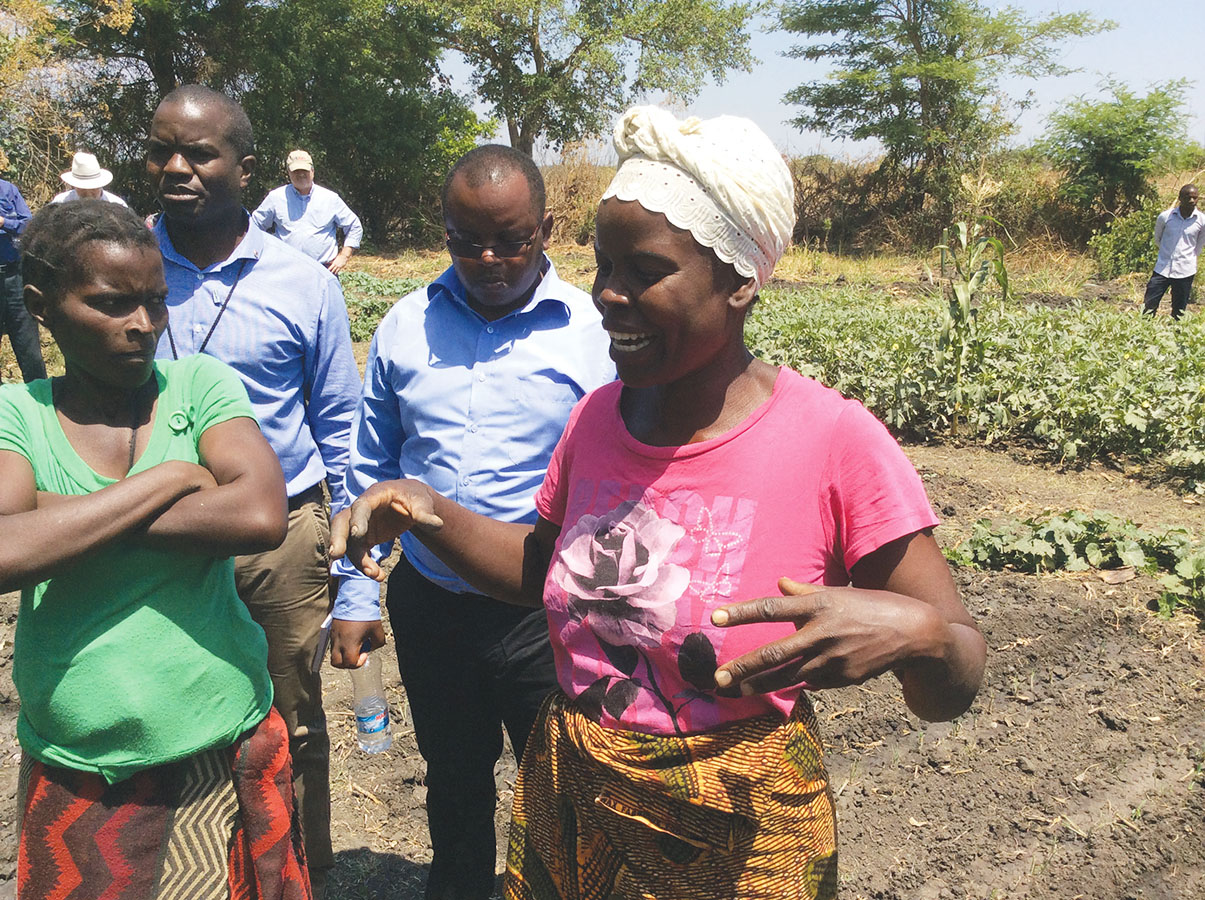 SITEMBILE SIWAWA, Lusaka
TO MIRIAM Chunga, a small holder farmer of Shamundende village in Sichanzu ward, central Zambia, farming has not only enabled her raise finances but has greatly improved the health of her family.
Before venturing into farming three years ago, the Chunga household had been faced with malnutrition due to lack of sufficient food.
For the past three years, Mr Chunga has religiously been growing crops such beans, spinach, okra, tomatoes, onions and various vegetables on a 50sq meter piece of land. The fact that she has a well which never runs dry at her farm has also been a plus for her.
â€œThe dietary needs of my family have greatly improved since I ventured into farming. We are now able to eat nutritious meals every day. Apart from improving our diet, I am also able to buy other foods to supplement our nutritious diet as well as send my children to school by selling the surplus farm produce,â€ Chunga narrated.
About 300 metres away from Ms Chunga is another small holder farmer, Mervis Chibeleki who specialises in animal farming. Ms Chibelekiâ€™s family diet has also improved because of her involvement in farming.
Ms Chibeleki who started animal farming in 2012 owns goats and chickens but also has a garden like the rest of the farmers in the village.
Like Ms Chunga, Ms Chibelekiâ€™s interest in animal farming was in a bid to escape poverty and malnutrition.
â€œWhen I started, I had one goat and one chicken. Now, I am a proud owner of seven goats and 20 chickens. Animal farming has proven to be a good source of proteins recommended for health living,â€ Ms Chibeleki said.
Evidently agriculture does not only play a role in food security but also contributes to the good health of citizens particularly children.
Child malnutrition has proved to be a challenge in most developing countries. In Zambia, 45 per cent of children under five years old have stunted; a situation which has been attributed to poor diet and health.
It is against this background that Realigning Agriculture to Improve Nutrition (RAIN) project was initiated in Mumbwa district to help small holder farmers improve the nutrition of households.
Mumbwa district with an estimated population of 218,328 has child stunting levels at 43 per cent.
RAIN, a project implemented by Concern Worldwide with support from Irish Aid and Kerry Group, is a five year one programme which aims at eradicating malnutrition among families in Mumbwa.
Small holder farmers under the RAIN project mainly focuses on food production and diversification of household consumption. Framers also focus on cultivating and processing a variety of crops.
The crops grown which are chosen based on their nutritional value include legumes (cowpeas, groundnuts, biofortified beans, orange fleshed sweet potatoes), vegetables (amaranthus, rape, tomatoes, carrots, spinach, pumpkins, green beans) and fruits (banana suckers, granadillas, watermelons).
Additionally, the farmers boast of a â€˜goat pass on schemeâ€™ which aims at ensuring they all have animal source products that provides the much-needed proteins and minerals.
RAIN project district programme coordinator Concern Worldwide Richard Mwape said about 45, 000 households have so far been empowered with the know how to improve their nutrition.
Mr Mwape said agriculture has potential to improve food security and reduce hunger levels currently being experienced by many families.
â€œThe use of agriculture to fight child stunted growth in Mumbwa district couldnâ€™t have come at a better time especially that majority of households (87 per cent) have access to land,â€ he said.
Another organisation which places emphasis on ending hunger and malnutrition in Africa is NEPADâ€™s Comprehensive Africa Agriculture Development Programme (CAADP), a continental framework for transforming agriculture in Africa.
The framework aims at improving national status by elimination child under-nutrition in Africa with a view of bringing down stunted growth to 10 per cent and underweight to five per cent by 2015.
And Mumbwa District administrative officer Charles Hamphande has recommended for more projects that will reduce hunger and increase food security as well as provide nutrition.
Mr Hamphande however said there is need for guidance on the type of crops small holder farmers can diversify in to reduce hunger.
Irish ambassador to Zambia, Finbar Oâ€™Brien said addressing under-nutrition and hidden hunger through nutrition needed the integrational approach as malnutrition across sectors.
Mr Oâ€™Brien said there have been some levels of success especially with the reduction in under-five mortality rates but Zambia can do much more.
â€œHowever, nutrition for growth commitments to reduce under nutrition by 50 per cent and increase nutrition funding by 20 per cent year are a bold statement of commitment,â€ Mr Oâ€™Brien.
And Deputy Minister-Ministry of Agriculture and Livestock Greyford Monde said the government is cognizant that combating under-nutrition will result in improved social welfare and eventual reduction in poverty levels in the country.
Mr Monde said hunger affects human health and development.
â€œIt is for this reason that Government is developing operational guidelines for the promotion of diverse locally available and processed foods,â€ he said.