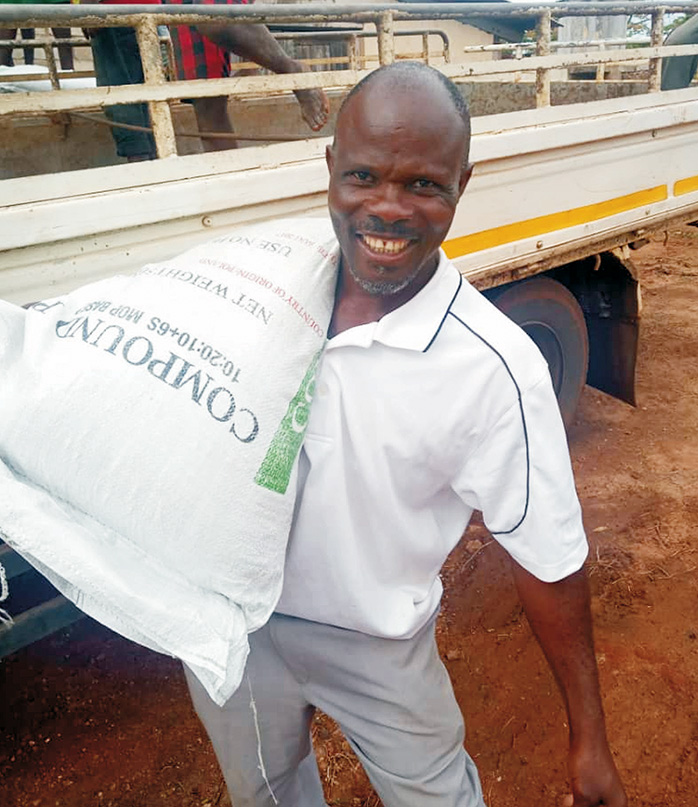 CHRISTOPHER CHIPEMBA, Lusaka
MULENGA Mwamba, a small-scale farmer of Chiponde village in Chief Chipalo’s area in Luwingu district, has been worried about the possibility of experiencing a low crop yield for the second time in a row.
If the e-voucher-related difficulties he had experienced in the 2017/18 farming season are not addressed, then the 2018/19 farming season would spell doom for him.
Mr Mwamba is hoping that this time around, he will be able to access farm inputs without any hurdles. Then he would be able to recover from the previous year’s poor yield.
In the 2017/18 farming season, Mr Mwamba harvested a paltry 20 50kg bags of maize from his 1 lima field because he received his farm inputs quite late.
He recalls that during the previous farming season, he deposited into his account the mandatory K400 contribution for each farmer to get one pack of farm inputs under the Farmer Input Support Programme (FISP), but four weeks later, nothing was happening.
Mr Mwamba made countless trips to an agro-dealer in Luwingu boma, but he was told that the K1,700 contribution by the Government had not been credited to his account. This meant that he could only access farm inputs worth the K400 contribution he had made.
“Four weeks after depositing the K400 for one pack of farm inputs, every day I went to the agro-dealer at the boma to redeem the card. Each time the agro-dealer swiped the card, he would tell me that only K400 was available in my account because the K1,700 contribution by the Government had not been uploaded by the bank. Every time, I was being told the same story until February when I just decided to get one 50kg bag of Urea. By that time, my crop had already been destroyed because I could not get money elsewhere to buy enough D Compound and Urea fertilisers.
“I am worried that if this farming season (2018/19) the Government does not intervene to resolve the problems we had experienced with the e-voucher cards, our harvest might be affected again,” Mr Mwamba said.
He is just one of the worried farmers regarding the e-voucher challenges that many farmers on the FISP experienced last farming season.
However, Government has risen to the challenge and has put in place measures to resolve the e-voucher-related problems in the effected districts.
On June 2, 2018, Minister of Agriculture Michael Katambo announced that 400,000 farmers, representing 40 percent of the 109 districts where the e-voucher was administered in the 2017/18 farming season, would revert to the conventional FISP this farming season.
This means that the farmers would receive farm inputs from fertiliser distributors contracted by the Government and not from agro-dealers via e-voucher cards.
“The e-voucher has faced challenges like farmers losing cards or forgetting their pin numbers and lack of network in some areas. And some service providers have been overwhelmed by the load of farmers on the system, leading to delays in farm input delivery. In this coming farming season, 400,000 farmers will receive their inputs using the conventional FISP system so that these problems that our farmers are facing can be resolved,” Mr Katambo said.
The Zambia National Farmers Union (ZNFU) has welcomed the decision by the Government to re-stream 40 percent of the e-voucher FISP to the old system.
“This move is going to ensure that farmers that were not captured on the system during the past season will access farm inputs on time. This will also help the Government to clean up the database and work on all the challenges that the Zambia Integrated Management Information System encountered during the past 2017/18 farming season,” ZNFU president Jervis Zimba said.
The farmers in the districts that have reverted to the old FISP system are already accessing farm inputs.
One such farmer is Naomi Sakala, a mother of five who lives in Nyamphande settlement scheme in Petauke district who is happy to have received farm inputs on time.
“Boma yacita bwino ngako kubweza mwamene tinalikutengela fataleza kale. Apalomba no chelwa kulima kuliye. Tionga zikomo kuli iyi company ya Neria poti letela fataleza kuno kwasu mwamusanga (Government has done well to revert to the old system. We shall not delay in our farming. We thank Neria for bringing the farm inputs here on time),” Mrs Sakala said.
Neria Investments Limited has been delivering fertiliser to all the targeted districts in Muchinga, Northern and Eastern provinces that have reverted to the conventional farm input distribution system.
General manager Martin Chaikatisha said his company stands ready to support Government by transporting farm inputs to targeted districts on time, including difficult-to-reach places.
“The Government contracted us to supply 46,739.35 tonnes D Compound fertiliser and 32,875 tonnes Urea fertiliser to farmers in Muchinga, Northern and Eastern provinces under the conventional FISP.
“We transported all the required inputs to our depots in these areas early, even to areas difficult to reach because we want farmers to access these inputs in good time. So, it should take us up to one month to distribute the inputs to (all) the farmers,” Mr Chaikatisha said.
Petauke district agriculture coordinator Mwaba Lubasi said it is good that Government has reverted to the conventional FISP in some districts because this has enabled the farmers to collect farm inputs on time.
“It is good that Government reverted to the conventional FISP in some areas because this has enabled farmers to access farm inputs early while the Government is working on the problems of the e-voucher. I have just come back from the depot, I found farmers collecting the inputs,” Mr Lubasi said.
Neria Investments depot manager for Petauke district Andrew Mununga said about 40 percent of the farmers in the district have already received farm inputs since they started distributing fertiliser on November 7, 2018.
“For Petauke district, the total allocation was 215,124 x 50kgs of both basal and top dressing fertiliser. So far the farmers have collected 43,035 x 50kgs D Compound and 27,925 x 50kgs Urea, which is about 40 percent of the total allocation. So far, the programme is going on well, we are not experiencing any problems,” Mr Mununga said.

Chongqing: Imposing city of China
The place of food in Chinese culture