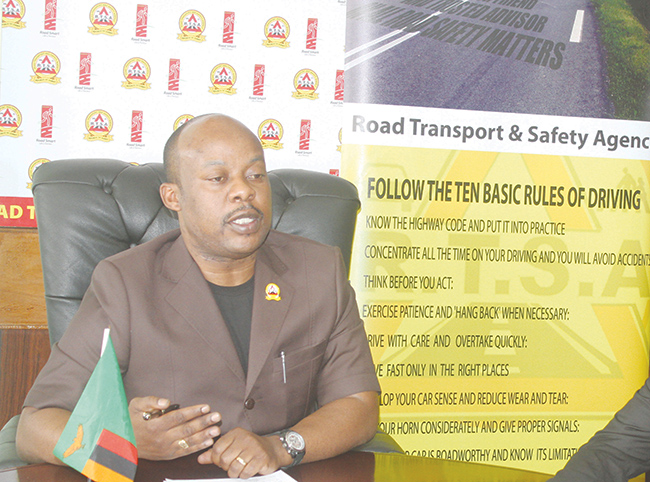 IT IS extremely saddening that Zambia has continued to lose lives through road traffic accidents which can be avoided.
One such accident which was unnecessary was the one involving a Scorpion Bus which hit into a stationary truck and claimed 14 lives on the Chingola-Solwezi road.
Road Transport and Safety Agency chief executive officer Zindaba Soko says if further investigations find the operators wanting, the licence will be suspended or revoked.
However, much as suspension or revocation of licences is one of the deterrent measures, the spate of accidents does not suggest so.
It is time RTSA and stakeholders started looking at other means to bring sanity on our roads. RTSA should also apply the law fairly.
The law must be amended to be more punitive. The Judiciary must take charge and mete out maximum sentences to serve as a deterrent or we will continue losing productive people that could contribute to economic growth and national development.
A new World Bank study funded by Bloomberg Philanthropies found that reducing road traffic deaths and injuries could result in substantial long-term income gains for low and middle-income countries.
While there is general recognition of road traffic injuries and fatalities, little is known about the link between road traffic injuries and economic growth. The new report quantifies how investments in road safety are also an investment in human capital.
The study, published in January 2018, found that countries that do not invest in road safety could miss out on anywhere between seven and 22 percent in potential per capita gross domestic product growth over a 24-year period.
This requires policy-makers to prioritise proven investments in road safety. The cost of inaction is more than 1.25 million deaths a year globally, diminished productivity and reduced growth prospects.
Every accident is a threat to economic development because breadwinners, graduates, mothers and holiday-makers’ lives are taken away abruptly.
Imagine people who were travelling to the North-Western Province for holiday, work, to look out for business opportunities; pupils or teachers returning to re-unite with families ending their lives through reckless driving!
It is unacceptable.
Easter is a time for people to celebrate the death and resurrection of Jesus Christ, it is also an opportunity to take advantage of the long weekend to promote domestic tourism.
Instead, people are mourning while Government, through the Disaster Management and Mitigation Unit, has been compelled to spend for something which was not planned.
The DMMU has moved in to lessen the burden of the bereaved families in meeting the funeral costs.
The aspirations of the 14 passengers were ended by a reckless driver who was over-speeding and ended up hitting a stationary truck.
There must be maximum sentence for bus drivers that kill people due to negligence as well as introducing heavy monetary penalties for erring bus operators.
We are aware that accident victims are compensated by bus operators but life is priceless. There is no amount of compensation which can be equated to human life. The best is to avoid accidents where they can.
And one of the prescribed measures was installing all public passenger vehicles with speed limiters but with time, RTSA seems to have relaxed.
The media should make follow-ups on these cases in court. Media coverage and heavy sentences have helped reduce defilement; they can save lives on roads, too. If the media dealt with defilement, it can deal with public transport carnage, too.
The accident is also a reminder of the need by Government to expedite the dual carriageways on most highways.
A widened road certainly reduces the risk of accidents.

Respect the essence of Easter
Easter Sunday – a new beginning