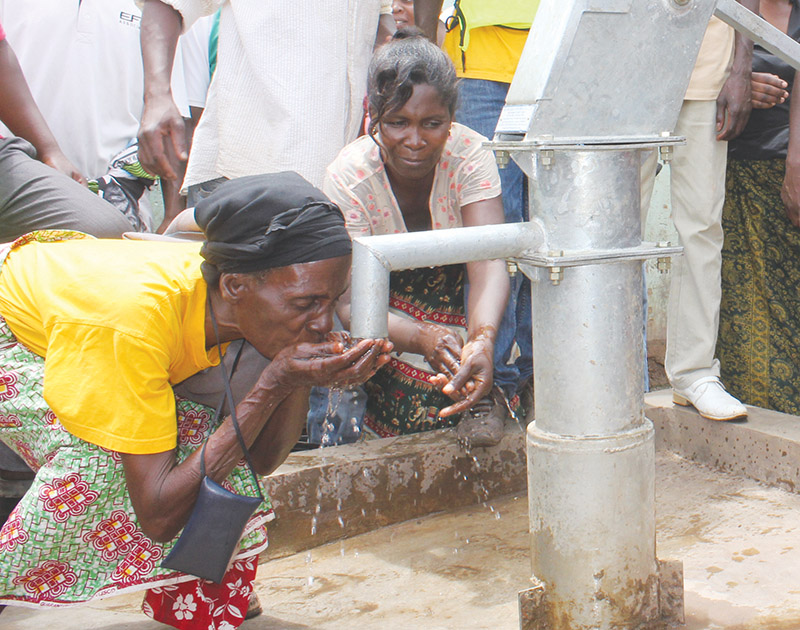 KAPALA CHISUNKA &Â  SYLVESTER CHISHIMBA, Lusaka
IT is a rainy Tuesday afternoon in Lusakaâ€™s Linda Township. Normally in such type of weather, streets are expected to be deserted but that is not the case for Linda Township. The streets are dotted with people, young and old, carrying huge yellow and white containers in search of water.
This is nothing new for the residents, who trek many kilometres to the nearby farm areas to draw water on a daily basis. If they are lucky, they get to have water running from their home taps once or twice a week for a few hours, then it is back to the rural routine.
The story is no different for the privileged few who have had boreholes sunk at their homes in a bid to ease the water crisis.
What is worse for the residents is that despite their situation, residents continue being billed monthly by the Lusaka Water and Sewerage Company (LWSC). The residents also feel cheated by LWSC that despite the completion of the Linda Water Supply project, they have continued to have erratic water supply.
LWSC recently completed the Linda Water Supply project which they said will cater for over 20,000 people in Linda Township. The project is aimed at enabling the residents to have access to clean water and improved sanitary conditions.
The project cost according to LWSC public relations officer Topsy Sikalinda is 443, 440 Euros (about K3,422,233) and it was completed with financial support from the European Commission.
a few months on and the residents are yet to benefit from the water project.
Like many residents in the township, Peter Muhone is not a happy man. According to Mr Muhone, the situation is supposed to have improved after the water utility company completed the Linda Water Supply project.
â€œWe are made to pay K70.80 every month, yet we have no water supply. When LWSC brought the water project to the township, we rejoiced because we thought our water problems were over but that is not the case,â€ said a visibly irritated Mr Muhone.
Mr Muhone, who blamed LWSC for the continued water problems, said the Linda water project is seemingly not adequate to cater for the huge population in the township adding that is the reason only a small population might be benefiting from the programme.
â€œWe usually have water for less than an hour if we are lucky then nothing for days. Occasionally water might come in the morning or later in the afternoon. At times we even go for two days without water, we have complained to LWSC on many occasions but nothing has been done,â€ he said.
Mr Muhone also accused LWSC of having encouraged residents to procure water pipes which the company said they would use to connect them to the main water network under the project when the company should have provided the water pipes.
â€œI am aware that not everybody is happy with the idea that we should all buy our water pipes for the company to use in the project when LWSC will be billing us monthly as well.
As residents, we had a meeting and decided that LWSC should provide water pipes and everything needed for the project and we will gladly pay the monthly bills as long as we have water in our homes,â€ he said.
Another resident, Loveness Phiri, said the water shortage is a great inconvenience because there is always commotion when they go to fetch water as the majority of them have one reliable source where they find it.
Ms Phiri said at times people walk about three kilometres to mount Makulu in search of the commodity.
â€œThis is not healthy at all. The situation can lead to an outbreak of water-borne diseases such as cholera and dysentery,â€ she said.
However, when contacted, Mr Sikalinda refuted claims the company has told residents to buy water pipes to have water supply connected to the main network.
He said it is the mandate of the company to provide and connect water to residents and not for customers to procure the pipes.
â€œWe have also received reports of some unscrupulous people pretending to be LWSC officers and going round townships misinforming our unsuspecting clients. People must be vigilant and report culprits to the police because we have not asked residents to buy water pipes in order to get connected to our network,â€ he said.
With regard to continued erratic water supply in the area despite the completion of the project, Mr Sikalinda said the company will carry out its own investigations to establish what is happening on the ground.
Mr Sikalinda said the Linda water project is meant to benefit all residents as it is one of the many by the water utility company aimed at improving effective delivery of clean and safe water as well as sanitation services in low-income communities.
â€œWe aim to increase the active participation of low-income communities in the delivery of water and sanitation services through effective local government and community partnership leading to increased access to drinking water and sanitation,â€ he said.
Mr Sikalinda said the same project saw the construction of a 2.7 kilometre water distribution network, installation of a 100 cubic metres elevated water tank, construction of 10 kiosks and two school ablution blocks.
â€œWith the anticipated increase in water supply in Linda township, it is expected that the sanitation situation as well as the health status in the area will improve remarkably, cases or incidence of water-borne diseases will reduce as well,â€ he said.

Of prophets and their rituals
Inonge Wina: Persona behind the Vice-Presidency