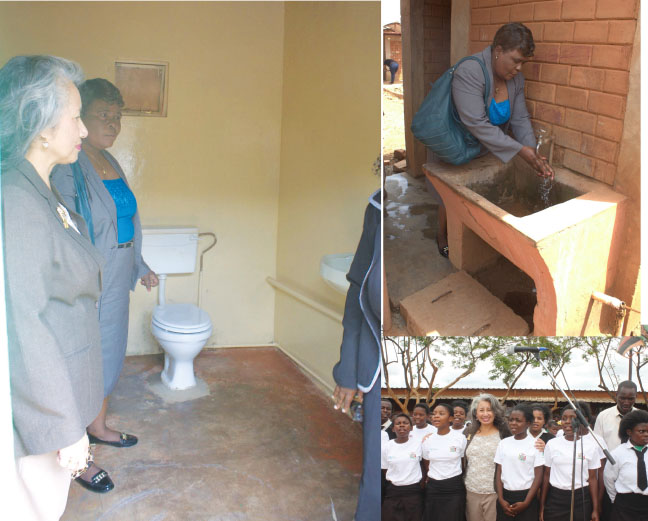 NOMSA NKANA, Lusaka
THE Ministry of Education Science and Vocational Training and Early Education (MESVTEE) has prescribed a standard ratio of one toilet compartment for every 25 girls or 40 boys in school.
In contrast to this ratio, some schools in Eastern province last year had one toilet compartment catering for 207 boys and another for more than 150 girls, a far cry from the prescribed standard.
Teachers and girls in the peri-urban areas of the Sub-Saharan African countries lose approximately six weeks of learning due to inadequate sanitation facilities that can help them manage their menstrual hygiene resulting in a high rate of absenteeism.
The insufficient number of functional clean toilets contributes to the poor learning environments in most schools.
Commemorating the World Toilet Day at Bauleni Special Needs School in Lusaka, Chief of Education for USAID Zambia, Iris Young said Government, cooperating partners, the Civil Society, members of the community and schools of Bauleni acknowledged the cardinal role that sanitation facilities play in the development of Zambia.
â€œWe are here at Bauleni Special Needs School embrace this yearâ€™s World Toilet Day under the theme â€œEquality and Dignityâ€. This School demonstrates how hygiene and educational needs are addressed equitably and reminds us that good sanitation must exist for all,â€ he said.
According to Ms Young, toilets in some communities are not available at home forcing women and girls to wait until dark to find a place to defecate outside putting them at risk of harassment and possible sexual assault.
Ms Young believes access to clean functional toilets equals a better educational environment, employment opportunities, improved safety, dignity and equality wherever one is in the world.
She commended the Bauleni Special Needs School for the home-based educational programme that ensures that children with disabilities have access to basic education and hygiene.
And the elimination of Open Defecation has been recognised as a key contributor to improved outcomes in the health and nutritional status of children.
It has also emerged as an area where Zambiaâ€™s National Water Supply and Sanitation Programmes are achieving significant results.
These achievements were noted through Community Approaches to Total Sanitation (CATS), a strategy that is rooted in community demand and leadership, focusing on behaviour and social change, and commitment to local innovation.
Minister of Local Government and Housing Emmanuel Chenda said a monitoring programme revealed that the coverage on sanitation increased between 1990 and 2010.
But despite that progress, just over half the Zambian population still lacks access to improved sanitation.
Mr Chenda said Government is still a long way from achieving the Millennium Development Goal (MDG) target of reducing by half the proportion of people lacking adequate sanitation.
â€œWe must all step up our efforts with all actors working together for tangible results. And as we look beyond 2015, it is essential that sanitation is placed at the heart of the post-2015 development network,â€ he said.
According to Mr Chenda the solutions need not be expensive or technology-driven adding that there are many successful models that can be replicated and scaled up.
The links between poor access to water and sanitation and ill health are well established.
At any given time, half of the hospital beds in low income countries are occupied by patients suffering from water and sanitation related illnesses.
Unsafe water, sanitation, and hygiene practices spread infectious diseases including diseases in the gut and also cholera.
Diarrhoeal diseases have particular relevance to children and these are exacerbated by poor access to water and sanitation.
These diseases are easily avoidable when basic sanitation standards exist.
This year, the World Toilet Organisation has drawn attention to specific issues of equality in terms of access and dignity especially for women who do not have access to safe sanitation.
â€œThis is obviously something that brings shame and embarrassment which, in itself a serious problem that has a significant impact on their happiness and dignity. It also puts them at risk of disease, embarrassment and attack,â€ Mr Chenda said.
And Priyanka Patel, Water Aid Zambia, Policy and Advocacy manager has appealed to Government and its partners to further the agenda of provision of adequate sanitation appropriate for use by persons with disabilities.
Ms Patel believes this would consolidate this yearsâ€™ theme of equality and dignity for all people regardless of oneâ€™s capabilities.
To bring the theme home, Water AID is thankful to the Village Water Organisation for rehabilitating some of the toilets at Bauleni Special Needs School.
With the rehabilitated toilets, her organisation is now able to provide safe toilets for individuals who do not have such facilities in their homes.
However there is still a huge amount of work to be done at the school as the toilet facilities is still basic pit latrines, which are inadequate for overall needs and unsuitable for most of the special needs pupils.
To this effect, Water AID plans to build two blocks of water-borne toilets which will include shower facilities for special needs pupils.
Ms Patel said only then will her organisation and cooperating partners be able to say there is genuine equality and dignity through provision of good sanitation and clean toilets suitable for everyone.