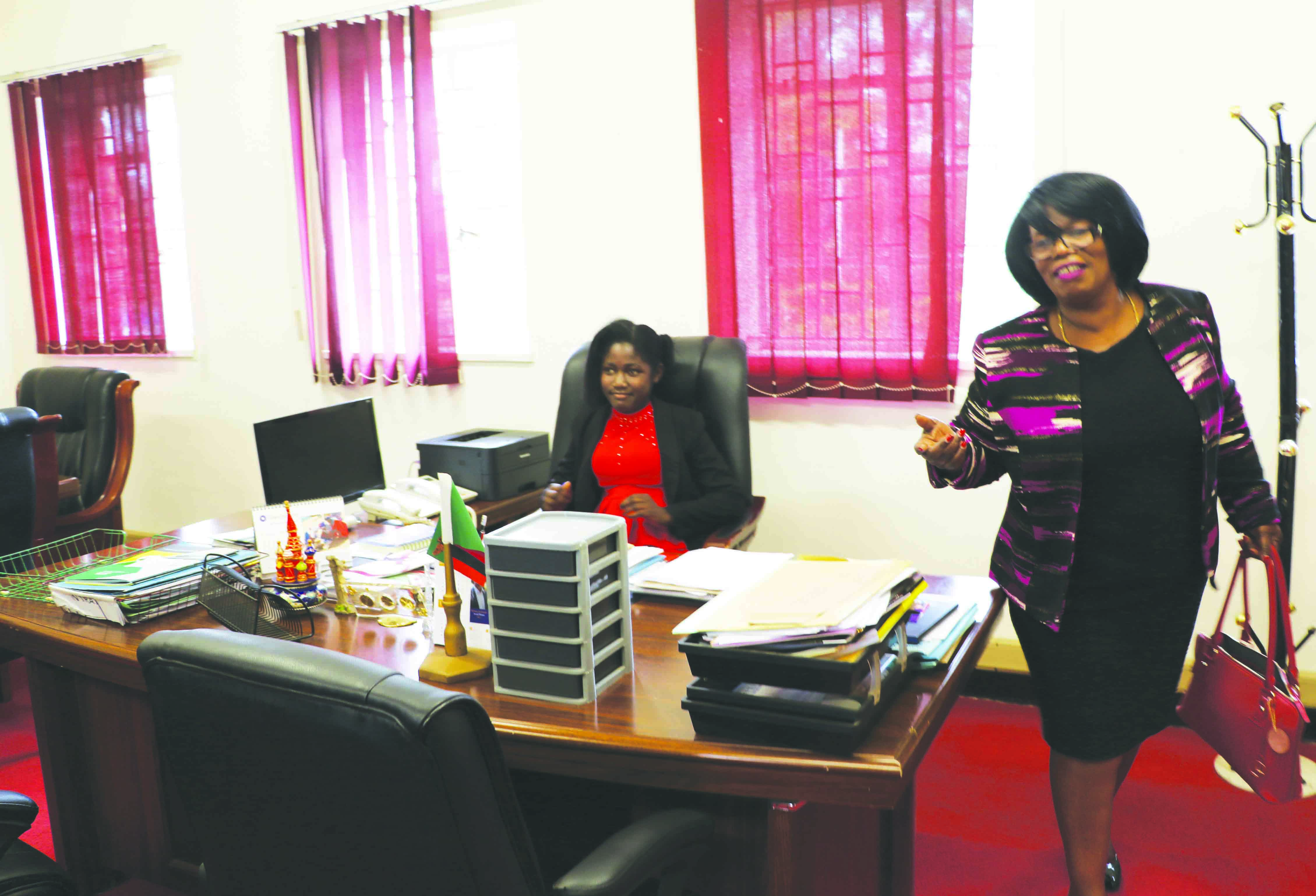 MINISTER of Higher Education Nkandu Luo leaves the office after Lombe Chilekwa had taken over her position.

LINDA NYONDO, Lusaka
VARIOUS girls had a glimpse of what their future might look like when they took over chief executive positions to commemorate the Day of the Girl Child on October 11, 2017 organised by Plan International Zambia.

The first girl to take over an executive position was Lombe Chilekwa, a grade 12 pupil at Libala Secondary School in Lusaka who took over from Professor Nkandu Luo as Minister of Higher Education on October 10, 2017.

The vividly happy girl said time has come for girls to start occupying executive positions.
“I am happy to be seated here; I want to work hard so that I can become a minister one day. Wow, I will start dreaming bigger, this is so so nice,’’ Ms Chilekwa said as she swung in the minister’s chair.
Professor Luo however said Ms Chilekwa should not focus so much on her achievement as a minister of Higher Education but she should be motivated to work hard at school for her to become a professor one day.
She told Ms Chilekwa that becoming a politician does not require somebody to be too educated, but that becoming a professor or a highly educated person, she has to study hard.
“Mentoring is the best way to get young people achieve their dreams. My mentor was Judge Lombe Chibesakunda, who is my auntie, and she was the first female Judge in Zambia.
Young lady, I will from today become your mentor, we will be meeting once every month,” Professor Luo told Ms Chilekwa.
The second girl to take over a ministerial position was Sandra Musowe, who took over as Minister of General Education replacing Dr Dennis Wanchinga.
Ms Musowe was excited but she was nervous that she lost her step as she was being ushered to go and sit in the minister’s chair.
To make her realise that she was a minister for a day, Dr Wanchinga advised her to call the secretary and make a request for anything she wanted.
Ms Musowe called the secretary and gave an instruction. To Ms Musowa’s disbelief, the secretary gave a gesture acknowledging and immediately returned with what the minister of the day had requested for.
Dr Wanchinga briefed Ms Musowe on the minister’s daily routine starting with reading what is written in the newspapers to daily briefings by heads of departments.
Ms Musowe accompanied Dr Wanchinga to a meeting where she was introduced as the Minister of General Education and acting Minister of Higher Education because Professor Nkandu Luo had travelled out of the country.
After the meeting, Dr Wanchinga took Ms Musowe on a tour of parliament. She later accompanied him to parliament though she sat in the gallery.
All the 50 girls who participated in the girls takeover, later met at the International School of Lusaka to share their experiences as chief executive officers of various government ministries and companies.
The first one to share her experience was Florence Phiri, who had taken over as Project Concerned International country director.
“I chaired a meeting which was only attended by senior officers. During the meeting, I made a decision that youths development trainings implemented by Concerned International should be conducted at Defence Force Centres,’’ she said.
Ms Phiri said her experience as a country director for Concerned International made her dream big. This meant she had to work hard to be a woman of influence one day.
She promised to work hard at school up to tertiary level so that she can hold an influential position in future.
The second girl to share her one day exciting experience was Kekeni Mikisi, who took over as UNICEF country representative.
Ms Mikisi said that her day started with a meeting at UNICEF office where she met people who work in different departments.
She later went for a meeting at Pamodzi Hotel where she made a presentation to participants as UNICEF country director.
Lusekelo Chibila also gave her experience as ChildFund country director.
She said she was happy to be given an opportunity as a leader of ChildFund and that the experience was overwhelming.
As for Mwenya Njovu, who took over as a director at PANOS Institute of Southern Africa, she learnt that communication was an important tool in life.
Ms Njovu said the takeover event has helped to build confidence in other girls and made them realise that they can become whatever they want to be in future.
“I and my fellow young girls should learn that we can be what we want. We should voice out until we are heard to a point where all our colleagues, both in urban and rural areas, will be allowed to get educated,” she said.
Elizabeth Liswaniso, who took over as chief executive officer of Stanbic Bank, said she was happy to see many women in managerial positions at the bank.
“I was encouraged and something in me was ignited, I realised that I aspire to be whatever position I so wish. The key is education,” she said.
Ms Liswaniso said her stint at the bank helped revived her dream of becoming a banker.
She told the gathering that she will pursue her dream to study banking and finance.
Most of the girls who took over different chief executive positions realised that such positions come with hard work.
The girls pledged to become ambassadors and champion the girls’ rights to education under the Plan International campaign ‘Because I am a Girl’.

Incentives vital for women in agriculture