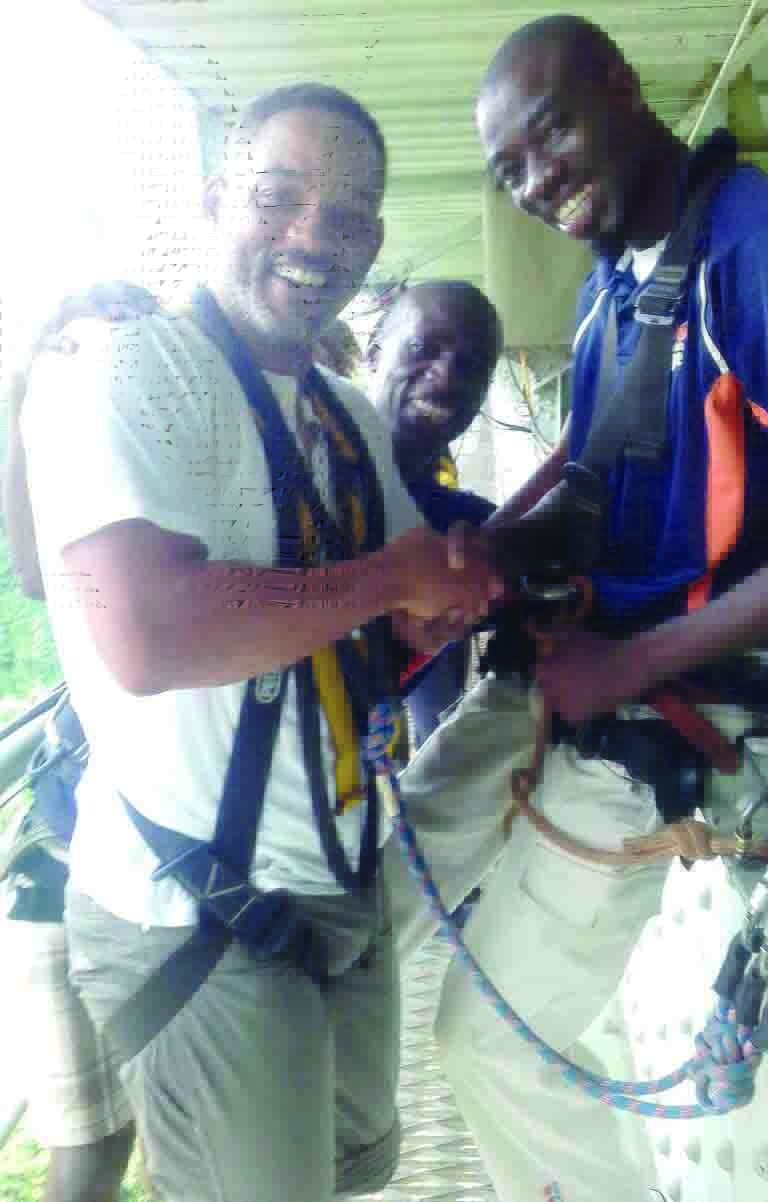 NANCY MWAPE, Livingstone
ON a cool Thursday morning, United States (US) Hollywood movie star Will Smith landed at Livingstoneâ€™s Harry Mwaanga Nkumbula International Airport at 10:56 hours aboard a Global Express private jet.
When the plane carrying the celebrity touched down, word went round the airport premises that a VIP from Zimbabwe had landed and airport staff seemingly paid little attention.
But when he finally disembarked from the jet, word quickly filtered through that Smith was the one who had actually landed. Later as he was leaving the VIP lounge, workers manning the stands rushed to have a glimpse of him while some managed to get pictures amidst tight security.
From the airport, the celebrated movie star and successful rapper was taken for a helicopter ride aero view of the Victoria Falls and later proceeded to fulfil his 20-year dream of bungee jumping at one of the worldâ€™s gigantic natural wonders â€“ the Victoria Falls.
Smith, 48, arrived at the Victoria Falls Bridge around lunchtime, when staff were complaining of hunger.
Mumbi Mapipo, a recovery man at Bungee, recounts that when Smith arrived, the mood among the workers suddenly changed as they screamed out the movie starâ€™s name.
Mumbi recalls that after the two ladies who were in Smithâ€™s company plunged, the US actor followed suit and gave a beautiful jump.
In a video in which the actor captured himself, Smith confidently moves to the edge of the bungee platform and takes the plunge on his instructorâ€™s command, diving without hesitation and laughing as he exclaims â€œWOWâ€ on the way down.
â€œThis is going to be a cool shot, watch out for this shot, this is crazy bungee jumping Victoria Falls. I have been wanting to do this for like almost 20 years. I have high blood pressure, so they need to get me from being upside down,â€ says Smith in a video he captured using a GoPro camera.
Being one of the staff that work under the Victoria Falls Bridge, Mumbi managed to get some shots with the star and the pictures nippily went viral.
â€œWhen he was coming out by the gate, I was likeâ€¦manâ€¦I have been your fan for so long and I reminded him of a number of his movies.
â€œI was likeâ€¦ man, the last time I saw you on TV, you were shaking hands with the late President Nelson Mandela, Obama and today, itâ€™s you and me under the bridge,â€ narrates the jovial Mumbi.
He nostalgically reminisces escorting Smith to the end of the bridge, chatting and laughing.
â€œWhile we were walking, I was likeâ€¦Smith, the next time you come, please take me along with you to America. I have suffered for long, and the lady who was moving in front of us was just laughing,â€ Mumbi recollects.
He says Smith was at the bridge for about 10 minutes and had a great time there.
â€œOh the guy is friendly, what you see in movies is exactly what you get in person. Seeing him live, shaking hands and hugging him, just made my day. His excitement is infectious,â€ he shares.
From the bridge, Smithâ€™s next stop was Livingstone Island, the best vantage point from where one can witness the enormous waters of the Mighty Zambezi River.
Livingstone Island is the place where Scottish explorer and missionary David Livingstone first glimpsed the Mosi-oa-Tunya (the Smoke that thunders).
On the island, visitors are given a guided tour, told about its history from ancient times when it served as a sacrificial site to the present day, and its World Heritage status.
The visit to the island was strictly private as access to the site is by boat. However, on his way back, the fans strategically positioned themselves on the fringes of Royal Livingstone Hotel waiting to steal a glimpse of Smith.
Secretaries who were attending a conference at the five-star hotel rushed to welcome the Hollywood man, screaming â€œWe love you, Fresh Prince of Bel-Airâ€.
Most of the people who managed to get pictures with him are employees of the tourist sites he visited because the snap holiday was kept highly secretive.
Tongabezi Lodge general manager Rudy Boribon, who organised Smithâ€™s transport and visit to Livingstone Island, said there is need for Zambia to establish escort security services that will cater for the needs of high-profile people as they visit the countryâ€™s tourist attractions.
â€œThe problem we have is that bookings for VIPs is done in South Africa and when they come to Zambia, everything is controlled by them because locally we donâ€™t have a company that provides escort security services,â€ Mr Boribon said.
According to him, Smithâ€™s visit to Zambia will raise the countryâ€™s profile on a global scale but stressed the need for Zambians to arrange visits for VIPs and provide all the necessary security services.
Some of the movies Smith has acted in are â€˜I, Robotâ€™, Independent Day, Ali, Pursuit of Happiness, Hitch, I am a Legend, Energy of the State, Men in Black and the Fresh Prince of Bel-Air.
After a full adrenaline-packed day, the Fresh Prince of Bel-Air left Livingstone highly contented especially after having fulfilled his 20-year dream of bungee jumping at the Victoria Falls.
The private jet carrying Smith took off at the refurbished and expanded Harry Mwaanga Nkumbula International Airport at 23:30 hours the same day.