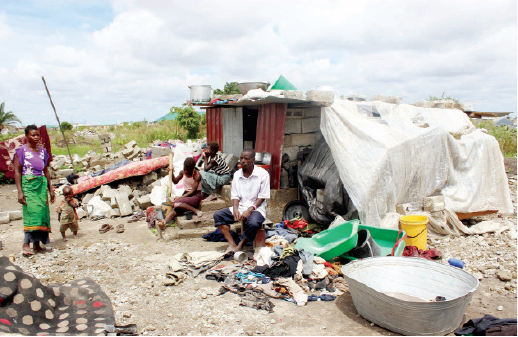 TEDDY KUYELA, Lusaka
OVER 800 families whose houses were demolished last week in Lusakaâ€™s Middle West are still sleeping in the cold as no institution has moved in to offer them any help.
Police demolished the houses on Friday last week to enforce a court order obtained by 20 people claiming ownership of the land.
A check by the Zambia Daily Mail crew which visited the area in the morning yesterday revealed that the residents are still sleeping in the cold and makeshift shelters.
The squatters enjoyed their last sleep inside their houses on Wednesday night before their houses were demolished in the early hours of Friday.
Beauty Matipa, a widow and mother of six, said she and her children have been sleeping in the cold after her house was demolished and that everything she owned has been destroyed by the heavy rains Lusaka has received in the last 48 hours.
â€œI am crying every day because I spent all the money I got after I sold the car, which my husband left to build this house they have demolished,â€ she said.
Another resident, Steven Simukonda, a father of nine, said he is disappointed that up to now, no institution has visited the area to help.
Margaret Chembe said the execution order was handled in a bad way, especially that they were not even notified so that they could find alternative accommodation.
â€œI have eight children and we are all sleeping in the cold from the time our house was demolished on Friday. All our belongings are just outside getting soaked,â€ she said.
Kelvin Chewe, another affected resident, called on Government to investigate the whole issue as the people who are claiming ownership of the land do not have the necessary documentation to prove that the land is theirs.
And the Patriotic Front (PF) leadership in Lusaka Province has appealed to the Office of the Vice-President through the Disaster Management and Mitigation Unit (DMMU) to quickly move in and assist the affected families.
PF Lusaka Province youth chairperson Kennedy Kamba said DMMU should quickly consider offering humanitarian aid to the residents affected by the demolition because they are suffering.
â€œWe are appealing to the Office of the Vice-President to urgently consider helping the people who are affected by this demolition exercise. The people are suffering, especially that it is now rainy season and something should be done urgently,â€ Mr Kamba said.
And efforts to get a comment from DMMU national co-ordinator Patrick Kangwa proved futile as his mobile phone went unanswered by press time.