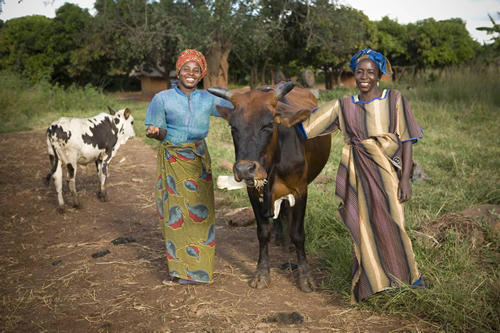 MWAPE MWENYA, Lusaka
ABOUT 70 women in Chief Hanjalikaâ€™s area in Mazabuka district have benefited from the â€˜Passing on the giftâ€™ project being implemented by Heifer International Zambia (HIZ).
One of the beneficiaries said in Mazabuka on Wednesday that the project has improved quality of life in the areas where it has been implemented.
Speaking on behalf of other beneficiaries, Annie Muchamba said the animals have helped women farmers to expand their hectarage and improve the nutrition status in their homes.
â€œIn the past, we used to produce only 20 50-kilogram bags of maize in our field, but we are now producing more than 500kgs. We promise to continue this project even when HIZ phases out,â€ Ms Muchamba said.
The women, however, asked Government to consider building a dip tank for their animals in the area.
HIZ country director James Kasongo said the project is aimed at empowering rural women farmers with livestock restocking to alleviate poverty in rural communities.
Mr Kasongo said this in Mazabuka recently when women farmers from three villages in Chief Hanjalikaâ€™s area handed over 70 animals to new beneficiaries of the project.
â€œLivestock restocking and the participation of women in the livestock industry is very important. Zambia needs a strategic, viable and sustainable livestock restocking programme to drive rural communities from poverty to prosperity,â€ Mr Kasongo said.
He said the 22 heifers and two bulls that HIZ had provided to the Hanjalika Draught Cattle Co-operative in 2001 with financial support from the German government have multiplied to 300 this year.
â€œI am aware that the Ministry of Livestock and Fisheries is planning to undertake a livestock census. I hope this activity will be given priority in order to guide all of us on the importance of stocking and restocking in Zambia,â€ he said.
And speaking earlier, Deputy Minister of Gender Dorothy Kazunga said there is urgent need to empower women in all sectors of society, especially in agriculture.
Ms Kazunga said Government values partners like HIZ in rural communities for their input in the implementation of its policies.
â€œTo recipient families, you have a task ahead of you to manage these resources given to you. We look forward to a time you will also pass on the gift to other needy families,â€ Ms Kazunga said.
She praised HIZ and the World Food Programme for partnering with Government in ensuring that small-scale farmers are organised into effective co-operatives.