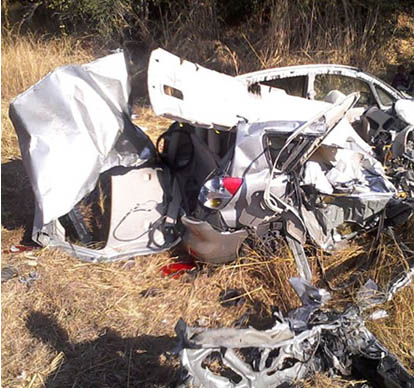 NANCY SIAME, Lusaka
FIVE people have died while two others including a two-year-old boy are admitted to Kaoma General Hospital after the vehicle they were travelling in overturned on the Kaoma-Mongu road.
Police assistant spokesperson Esther Katongo said yesterday that the accident happened on Sunday around 17:50 hours about five kilometres from Tatamoyo Zambia Wildlife Authority (ZAWA) barrier in Nkeyema district.
Ms Katongo named the deceased as Gillet Siwila, an employee of Zambia Daily Mail, and another man who is yet to be identified.
â€œTwo female adults who have also not yet been identified died on the spot,â€ Ms Katongo said.
She said Henry Banda, 47, of Kanyelele village in Chipata died on the way to the hospital
Ms Katongo said Peter Musole, 23, of Kaoma Site and Service and the toddler survived the accident and are admitted to Kaoma District Hospital.
â€œIt is believed that the mother of the boy died in the same accident,â€ Ms Katongo said.
She said the accident involving a Toyota Noah, which was being driven by Charles Musonda, an employee of Zambia Daily Mail, happened as he tried to overtake another vehicle.
â€œAs he was trying to overtake, he lost control of the vehicle making it overturn several times,â€ Ms Katongo said.
She said Musonda escaped with minor injuries and is currently in police custody.
She said Musonda has been charged with five counts of causing death by dangerous driving.
â€œSiwila was the driver of the vehicle but he got tired and gave the vehicle to Musonda to drive when the accident happened,â€ Ms Katongo said.
She said the bodies are in Kaoma District Hospital mortuary.
And Zambia Daily Mail director human resources and administration Lutato Nyendwa said the company is making efforts to bring back the body to Lusaka and that the company regrets Mr Siwilaâ€™s death.