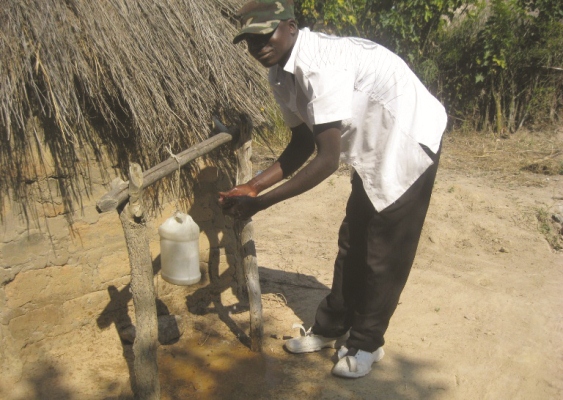 From DARLINGTONE KABAMBE in Kaoma
THE United Nations Childrenâ€™s Fund (UNICEF) says about 40 communicable diseases are transmitted through the shaking of hands.
Country representative Hamid El-Bashir said there is need to ensure communicable diseases transmitted through hands are prevented.
Dr El-Bashir said this during a Community Led Total Sanitation (CLTS) promotion and sensitisation programme held at Tateyoyo checkpoint in Nkeyema in Western Province.
The event was held under the theme â€œAdvocating for 100 percent sanitation through proper use of adequate toilet and hand washingâ€™.
Dr El-Bashir said UNICEF is committed to ensuring that sanitation programmes in the country are fully sponsored to improve living standards of people.
He said CLTS is an innovative methodology aimed at eliminating open defecation by ensuring that everyone in the district uses a hygienic toilet.
Western Province Village Water Zambia manager Mubiana Muyangwa said about 150,000 households in Kaoma, Mongu and Kalabo districts have achieved open defecation-free (ODF) status in the province.
Mr Muyangwa said with the support and funding of about K6 million from the Department for International Development (DFID), 42 latrines will be built and 30 boreholes will be drilled in the province.
He said about 58 latrines will be constructed in 100 schools in the province, adding that open defecation-free status in schools will generate synergies among pupils, parents and teachers in the area.
Chief Kahare of the Nkoya- speaking people commended UNICEF for supplementing governmentâ€™s efforts aimed at having a healthy nation.
He advised his subjects to ensure that open defecation in their homes is brought to manageable levels through the use of toilets.
Chief Kahare complained that many deaths in his chiefdom are caused by waterborne diseases but are largely associated with witchcraft.
He added that due to lack of knowledge on the risks associated with open defecation, his subjects do not appreciate the need to abandon the practice.
The traditional leader pledged to encourage his subjects to use the tip-tap hand washing innovation to improve hygiene and sanitation in Nkeyema and Kaoma.
He said the tip-tap hand washing innovation that was demonstrated to travellers at the checkpoint will encourage healthy standards of living.