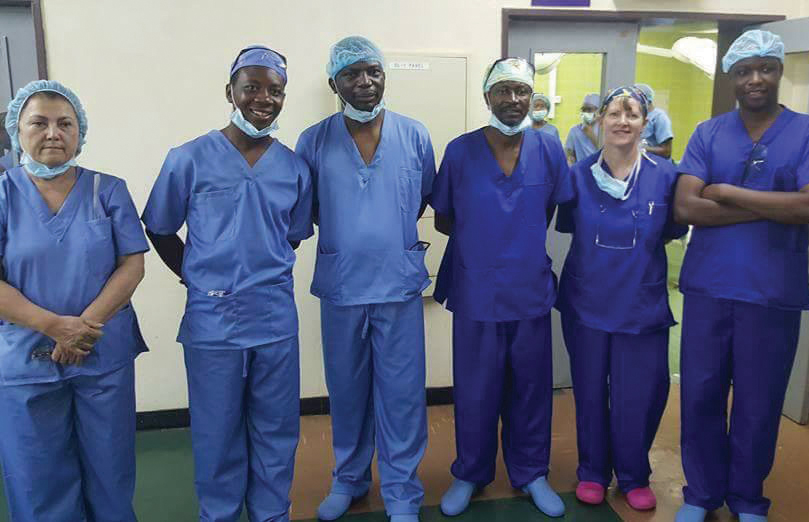 DOREEN NAWA, Lusaka
THE year 2018 will go down in history as one in which some memorable milestones in Zambia’s medical history have been made.
All these milestones were recorded at the University Teaching Hospital (UTH) in Lusaka.
The hospital, which until recently was segmented into five hospitals, is the country’s largest and oldest health facility.
The five hospitals created are the Women and New Born hospital, the Eye hospital, the Emergency Hospital, Paediatrics and the Adult hospital.
The year 2018 began on a challenging note when the country was expectant of the scheduled surgery of the conjoined twins, Bupe and Mapalo.
After a month into the New Year, Bupe and Mapalo, born in Kawambwa, Luapula Province, were transferred to Lusaka for further attention.
A surgery was scheduled on February 2, 2018.
And on this day a team of about 30 medical staff successfully separated the seven-month-old conjoined twins in a landmark operation done at UTH in Lusaka. The surgery was done at the Women and New Born Hospital. On this day, at about 17:00 hours, renowned Zambian neurosurgeon Kachinga Sichizya announced on his Facebook page that the operation was successful and completed at 16:58 hours.
“Zambia has new heroes! The much-anticipated first separation of Siamese twins has ended successfully after close to 7 hours of surgery. We give God the glory. Please receive our new champions,” he said, referring to the team of surgeons and supporting staff.
The team was led by Dr Bvulani Bruce and Dr Robert Zulu and the anaesthetic team led by Dr Christopher Chanda, the nursing team led by Josephine Chimpinde and Peggy Mashikati and paediatricians Sylvia Machona and Kunda Mupesu Kapembwa.
It was an operation that sent Zambians to cheers considering that the hospital had never carried out such an operation.
Updating journalists on the operation, UTH Mother and Newborn Hospital senior medical superintendent Maureen Chisembele said the twins were successfully separated.
And there was jubilation among doctors who were monitoring the operation from another room after the successful separation of the twins.
The doctors started operating on the twins at 11:00 hours on February 2, 2018.
The girls, Bupe and Mapalo, who shared a liver, were conjoined at the abdomen.
Zambian top surgeons Professor Lupando Munkonge, Dr Tackson Lambert, Dr Chadwick Ngwisha and Professor Sultanov led the team of surgeons who operated on the twins.
A few months later, another milestone was reached.
On September 14, 2018, UTH operated and successfully removed a tumour from the middle of the brain through the nose, a complex operation called Transnasal Trans-sphenoidal approach.
Dr Sichizya, who was part of the team of doctors that conducted the operations, confirmed the development.
Dr Sichizya said the operation took eight hours, describing it as a major score for Zambia’s biggest hospital.
“It is the first time such a procedure is done in Zambia as patients have been referred to India. A team of neurosurgeons and surgeons combined efforts to successfully remove a tumour from the middle of the brain through the nose, a complex operation called Transnasal Trans-sphenoidal approach. The operation, which began at 14:00hrs, only ended at 21:30hrs,” Dr Sichizya said
The operation had been conducted by a group of indigenous Zambian surgeons.
October was not just a month of freedom to the nation. It was also a month to remember for Job Kasweshi, 30, who successfully received a kidney from his brother, Tinashe.
This, again, was another successful surgery conducted at UTH.
On October 25, 2018, UTH scored another milestone by conducting a first-ever kidney transplant surgery.
With the success UTH recorded in 2018, it could ease the pressure on patients being referred to India, which is not only distant but very expensive.
Visiting donor and recipient of the first-ever kidney transplant surgery conducted at UTH, President Edgar Lungu expressed confidence that the successful kidney transplant surgery will help cut down on monies Government spends on sending people abroad for treatment.
The kidney donor, Tinashe Kasweshi, 25, a lawyer and the recipient, Job Kasweshi, 30, are siblings.
The team of doctors led by Zambian surgeon Michael Mbambiko and an expert from India successfully conducted the kidney transplant operation.
Like most professionals in many developing countries, the doctors at UTH are not exempt from some of the difficulties that are peculiar to their work.
Considering the staffing level challenges and many other challenges that the health sector faces not only in Zambia but worldwide, such surgeries being conducted locally are worthy the celebration.
According to the World Health Organisation (WHO), Zambia has only 1,500 medical practitioners, and faces a shortfall of 3,000 doctors.
The WHO recommends that for every one doctor there should be 5,000 patients. In Zambia, one doctor attends to 12,000 patients.
The above ratio points to consequences such as work overload due to the shortfall of physicians.
As all is done for 2018, a puzzle is yet to be solved on a three-year-old boy of Chipata who was found with 44 needles and wires and only 24 were removed and 18 remain in the body.
The boy is waiting to undergo surgery and is currently admitted to UTH.
Doctors at Chipata Central Hospital removed 24 needles from the boy’s body before evacuating him to Lusaka.
Now all eyes are on the UTH surgeons.
Giving an update on the anticipated surgery, UTH head of clinical care. At the Children’s Hospital, Musaku Mwenechanya, said the boy still has 18 needles in his body which need to be removed.
Further, Dr Mwenechanya said the hospital is still making preparations for the surgical operation as it requires specialised doctors and equipment to conduct the surgery.