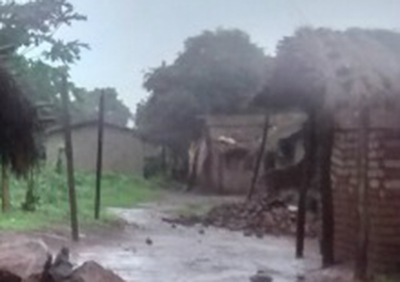 BUTTYSON KANDIMBA, Kalumbila & CHAMBO NGâ€™UNI, Kabwe
OVER 180 families have been rendered homeless after their houses collapsed in Shilenda Ward in Kalumbila district, North-Western Province, as a result of heavy rains that have been pounding the area insistently.
The victims have taken refuge in churches and learning institutions.
Shilenda Ward councillor Felix Kalungu said in an interview in Kalumbila yesterday 110 houses in Manyama and 78 in Shilenda have collapsed in the wake of the heavy rains.
Mr Kalungu said the affected families are now living in churches while others are spending nights in the cold.
â€œI have just compiled a list and I am now going to present it to the district commissioner by Tuesday,â€ he said.
Mr Kalungu appealed to government, through the Disaster Management and Mitigation Unit (DMMU), to quickly assist the affected families by providing them with tents.
â€œLet the government help us with tents because most of these people, if you go to Shilenda, are now staying in the churches but now churches are not for sleeping but places of worship. Now they have been occupied by individuals,â€ he said.
Zambia has been experiencing normal to above normal rainfall since December, which has left a trail of destruction washing away bridges and causing houses to collapse.
Mr Kalungu has also said plans are under way to connect piped water to Manyama community in his area.
He said the council is in discussions with the North-Western Water Supply and Sewerage Company (NWWSSC) on kick-starting the project.
â€œWe want to connect Manyama with piped water and we have talked to North-Western Water.Â  They are likely to be in the area by May and most of the people are likely to have water by June,â€ Mr Kalungu said.
He said the council would soon start working on feeder roads in the area once the rainy season is over.
Meanwhile, people affected by hunger in Luano Valley, Central Province, have started receiving relief food.
Luano district commissioner Christopher Chibuye said the DMMU allocated 23 tonnes of relief food to the region.
â€œThe relief food is being distributed in hard-to-reach areas in the valley which are severely affected by hunger,â€ Mr Chibuye said.
He said the bags of maize have been airlifted into Luano Valley by Zambia Air Force (ZAF).