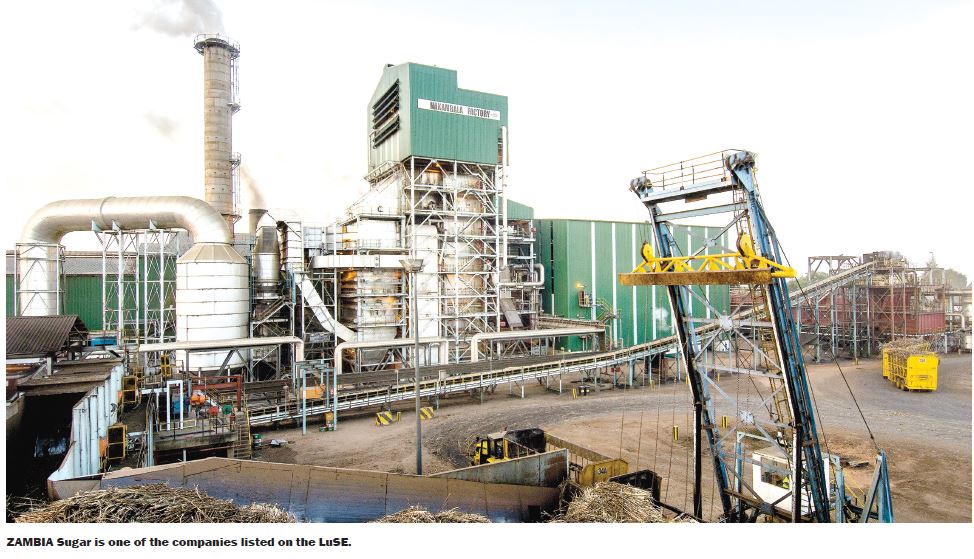 CYNTHIA MWALE, Lusaka
IT HAS not just become a global trend, but one of the logical ways of sourcing for cheaper and long-term financing for companies wishing to grow – listing on the capital market has demonstrated this fact.
The flip side is to offer opportunities to citizens to achieve financial empowerment.
In Zambia, the stock market is not a new phenomenon as it has been in existence for over two decades. Currently, 22 companies are listed on the Lusaka Securities Exchange (LuSE) and are undoubtedly making remarkable business sense.
“Zambia Sugar listed on the LuSE with an IPO [initial public offer] in 1996. The company enjoys advantages by being a listed company on the stock exchange.
“Stock and stock options programmes can be offered to potential employees, making the company attractive to top talent. At listing, Zambia Sugar employees were offered shares under the Employee Share Ownership Plan [ESOP],” Zambia Sugar head of communications and corporate affairs Japhet Banda said.
Like Zambia Sugar, other listed companies with business acumen are Zambeef Products Plc, Copperbelt Energy Corporation, Lafarge, Shoprite, Bata Shoe Company, Standard Chartered Bank, Investrust Bank, Airtel, Zambian Breweries ZCCM-Investment Holdings and Zanaco.
Others are Prima Reinsurance, Metal Fabricators of Zambia, BRITISH American Tobacco, Cavmont Capital Holdings, Madison Financial Services , African Explosives Zambia, Pamodzi Hotel and Puma Energy.
Of the 22 firms listed on the capital market, two are state owned enterprises (SoEs), ZCCM-Investment Holdings and Zanaco, which are not new names in the business circles and have been successfully been declaring dividends.
But is it necessary for SoEs to consider listing on the stock market?
Private Sector Development Association (PSDA) believes that the value of listing on the stock exchange is that an SoE can raise cheap capital by inviting the public to buy shares.
“This will be the cheapest form of re-capitalising the business and allowing the business to grow and expand,” PSDA president Yusuf Dodia notes.
In any democratic dispensation, it is important that SoEs are liberal in managing day-to-day operations to make meaningful socio-economic contributions to the country.
This way, the SoEs can be transparent and accountable to the public as opposed to being influenced by Government.
Mr Dodia agrees that such enterprises tend to be institutions that are politically driven because usually the management is installed by political leaders and yet the resources are made available through taxpayers’ contributions. “Accountability of SoE is generally very low as there is no identified owner that would be fully focused on the viability and profitability of the company and thus oversight for sustainable operations is not in place.
“It is, therefore, useful for SoEs to be listed on LuSE because the value is [that] a company’s books must be published and there is a forced accountability of the operations of the company,” he added.
Clearly, the move to have profit-making SoEs listed on the stock market should be encouraged by well-meaning Zambians as this will demand that businesses are run professionally.
The question to have ZAFFICO as the third SoE to be listed on LuSE is a step in the right direction as there are accrued benefits.
President Edgar Lungu has been categorical that Government is not selling ZAFFICO as insinuated by some quarters, but that it intends to list SoEs to make them viable and transparent.
It is against this background that Government in 2015 transferred its shares that were held in 34 SoEs to the Industrial Development Corporation (IDC), an SoE which was incorporated in January 2014.
IDC was further created to help clean up the financial statements of the SoEs as part of the listing requirement.
“It is no secret that many SoEs are in need of recapitalisation to jump-start their operations. The capital raised from the sale of shares is then available to SoEs for investment in their operations.
“[This will among other things] reduce dependence on Government financial support, and SoE listings would generate and promote public confidence in the economy and encourage other companies to list,” LuSE chief executive officer Priscilla Sampa said.
Considering the enormous potential that SoEs present, Government is keen to see that the enterprises start making contributions to the country’s vision as enshrined in the Seventh National Development Plan and, ultimately, the Vision 2030- becoming a middle-income status.
In the 2019 national budget speech, Minister of Finance Margaret Mwanakatwe said some progress has been made in the performance of entities.
Mrs Mwanakatwe says out of the 45 enterprises, 17 are profitable.
“In 2018, out of 29 companies under the IDC portfolio, 15 posted profits out of which eight declared dividends. In addition, two out of 16 companies that are still under the Ministry of Finance declared dividends,” she said.
With such promising results, listing on the capital market would further boost the profitability of the companies as they will be compelled to adhere to the regulatory requirements thus growing their portfolios and creating jobs and wealth.
Globally, SoEs are grappling financially and governments are now encouraging them to list on the stock exchanges to broaden their resource base.
Zambia is no exception. It too, wants to stimulate the creation of jobs, industrialise and become competitive to grab the opportunities that are presented in the region and globally.
Therefore, LuSE is a financial platform that does not only cater for large companies or the elite in society but encompasses all that may wish to list to raise long-term capital as demonstrated in the alternative tier meant for small and medium-scale enterprises.

ZCCM-IH does it again